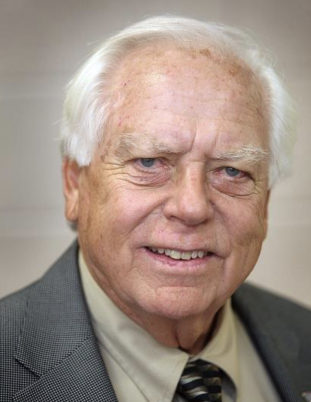 Pete was born on May 8, 1940, in the mining community of Mammoth, Utah, to Roland A. Gillespie and Minnie M. Wheelock Gillespie.  He later spent his youth in Eureka, Utah, graduating from Tintic High School in 1958.  After graduation, Pete served in the United States Air Force for 4 years from 1958-1962  in Montana and Texas.  He then went on to work for the Department of the Army Civil Service as a Computer Specialist in Dugway Proving Ground and Fort Douglas in Utah.  In 1978 he relocated his family to Stuttgart, Germany, where he was selected to manage a computer communication facility in Boblingen, Germany.  After returning from Germany, the family moved to Sierra Vista, Arizona, where Pete worked at Fort Huachuca.  After a successful career he retired in 1995.  He had made Sierra Vista his home since 1981.

Pete was initiated into the Benevolent and Protective Order of Elks, Tintic Lodge #711 in Eureka, Utah when he was 21 years old.  He was a member continuously for 61 years.  He proudly served as the Sierra Vista Elks Lodge #2065’s Exalted Ruler in 1988-89 and as the Lodge Secretary for many years.  He served the Arizona Elks Association as District Deputy Grand Exalted Ruler South in 1993-94, State Chaplain in 1995-96, Vice President South in 1998-99, 1st Vice President in 2003-04, and ultimately as the Association’s State President in 2004-05.  He also served as the Arizona Elks State Secretary and District Leader South for several years. In 2006-09 he was honored to serve on the Elks national Grand Lodge Membership Committee representing Area 7 (California, Hawaii, Nevada, Utah).  Pete was particularly proud of one of his greatest accomplishments which was serving as the Arizona Elks Major Projects Executive Director leading the effort of raising money for the University of Arizona’sChildren’s Research Center in Tucson and Camp Wapiti near Globe.  His greatest joy was making lifelong friends across the country while serving in all of these positions.

Pete was also very active with the Masonic Lodge, Huachuca #53, serving as the Lodge Secretary and as a Past Master of the Lodge. Pete was dedicated and passionate about his involvement with the Elks and Masons and loved to give back to help the community.  He also served on the Sulphur Springs Valley Electric Company Board of Directors from 2016 until his retirement in 2021.

He is survived by a loving family – his wife, Cheryl, his son, Rick (Kay) Gillespie (UT), his daughter Ann Gillespie (MD), and his stepson, Jason Chapman (FL), and stepdaughter, Jacquelyn (James) Gray (HI); his 7 grandchildren, Austin, Olivia, Shannon, Jessica, Johnathan, Justin, and Emma, and his three great grandchildren, Jaxsen, Brayden, and Makenzie.  He is also survived by his brother, Gary and wife, Julie.  Pete is also survived by his brother-in-law, GladeBerry and his wife, Maureen, his brother-in-law, Robert Carr and his wife, Jean, as well as several nieces and nephews, and his “furbaby” Izzy.

He was preceded in death by his parents, Roland and Minnie, his sister, Merle LaRae Gillespie Berry, and his many beloved “furbabies”.

Pete was a great leader, compassionate and caring, and a wonderful, loving family man. He was an all-round exceptional person, well loved and respected by all. He will be greatly missed by many.

The family would like to give a special thank you to Beehive Homes in South Jordan, Utah for their loving care.

A funeral in Pete’s honor will be held at the Brown Mortuary, 66 South 300 East in Santaquin, Utah, on Saturday, July 16, at 11:00 a.m. followed by a graveside service at the Santaquin Cemetery.

To order memorial trees or send flowers to the family in memory of Peter Gillespie, please visit our flower store.