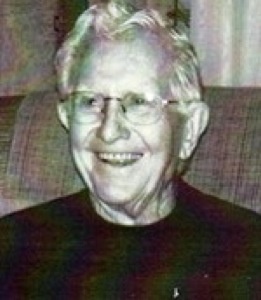 Adrian J Finch, loving husband, father, grandfather and great grandfather, passed away Monday, June 15, 2009 surrounded by his loving family. Born September 17, 1924 to Charles Edgar and Lillian Smith Finch. He was the third child of eight and was raised in Goshen, Utah.

He worked on the Finch farm most of his teenage years, until he met Phyllis Hammond - the love of his life. They were married June 15, 1945. They had three sons, Bradford, Darryl and Mark. Adrian and Phyllis both cared for the Goshen City Cemetery. Adrian also was a Police Officer for the Town of Goshen. He worked for Utah Construction for a short period of time. He then started drilling for Boyles Brothers as a superintendent from where he retired after serving many hard working years. He worked away from home a lot but still made time for his family.

He came out of retirement for his true calling - the Service Station - where he became Grandpa to all who knew him. He retired for the second time May 25, 2009. He is a great fisherman, avid hunter and undefeated horseshoe champion. You could find Adrian on his front porch with his guard dog, Lady, watching the passing cars everyday while keeping an eye on the town or in the coffee shop visiting with his fellow trouble makers. He will be greatly missed by all.

To order memorial trees or send flowers to the family in memory of Adrian Finch, please visit our flower store.