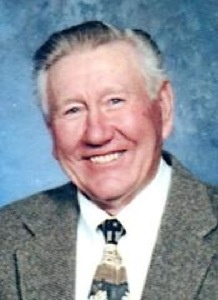 Alan Maurice Carter passed away peacefully Monday, September 3, 2012 at his home in Genola surrounded by those who dearly loved him. He was born August 10, 1935 in Santaquin, Utah, the son of Leslie Floyd Carter and Arvilla Salisbury Carter. He was raised in Santaquin.

He later met and married his sweetheart, Janet Noriene Jensen on July 9, 1954 in the Manti Temple. Alan had a passion for music! He was often caught playing the piano with his children and grandchildren surrounding him while he played numerous songs and loving every moment with them by his side. He loved to take rides with his sweetheart and would point out the beauty that was surrounding him in everyday life. He worked and retired from Geneva Steel and was a dairy farmer for 28 years. He was also member of the LDS church where he held a variety of callings. One of his most enjoyable callings was working with his wife in the Provo Temple.

Alan is survived by his wife of 58 years. They made their home in Genola and had six children. Sheila Noriene Robison (Hale), Alan Delbert Carter (Cindy), Karen Kay Staheli (Roy), the late Michael Ray Carter, Christine Tervort (Frank), Justin Jensen Carter (Toni) all from and in Genola, Utah. He also leaves behind 25 grandchildren, 47 great grandchildren, and two brothers, Terry Carter and Merrill Carter. He was preceded in death by his son, parents, sister Maxine Hudson and brother Floyd Carter.

Funeral Services will be held at the Genola Church on the corner of Center and Main Saturday, September 8th at 11:00 am with a viewing prior to the services from 10:00 to 10:45 a.m. Interment will be in the Goshen Cemetery.

A special thanks we want to give to our dear and precious mother, who took such good care of our father these last moths they shared together. She has shown us how to take care of the one's we love.

He will truly be missed and remembered by all who knew and loved him.

To order memorial trees or send flowers to the family in memory of Alan Carter, please visit our flower store.