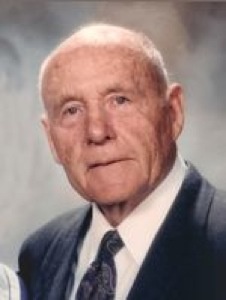 Albert Senius Nielson, 88, of Genola, died August 17, 2007. He was born January 9, 1919 in Richfield, Utah to Albert Senius and Elnora Farnsworth Nielson. His family moved to Dividend, Utah in 1931. He married Ethel Mae Johnson November 26, 1937 in Nephi, Utah and they were later sealed in the Manti LDS Temple. They were blessed with two wonderful sons. Albert had a natural instinct for mining and loved it. With his wife and sons, he traveled extensively in the U.S., Mexico and Canada. They were living in Hawaii when Pearl Harbor was bombed. He received his private airplane license in 1953. He served in the U.S. Navy during World War II throughout the Pacific. He worked as a construction superintendent in Wyoming, Michigan and Ontario, Canada. Albert served in many positions in the LDS church throughout his life, including President of the North Bay Branch in Canada. Later he enjoyed working in the Provo Temple for many years. He always planted a garden and enjoyed working there. Survivors include his wife, Ethel, of nearly 70 years; a son, Wm. Marion (Cheri) Nielson; 7 grandchildren, 44 great grandchildren and 4 great great grandchildren. He was preceded in death by his parents, a son, Albert (Janet) Nielson III, 2 brothers, Garth and J.H., and 2 sisters, June and Ila. Funeral services will be Monday, August 20th at 11:00 a.m in the Genola 2nd Ward, Main & Center. Friends may call at Holladay-Brown Funeral Home, 66 South 300 East, Santaquin, Sunday 6 to 8 p.m. and Monday at the church from 9:45 to 10:45 a.m. prior to services. Burial, Spanish Fork Cemetery.

To order memorial trees or send flowers to the family in memory of Albert Nielson, please visit our flower store.