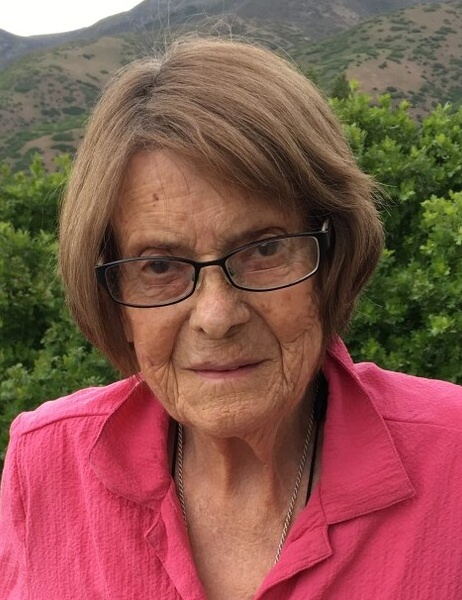 Alice Ivette Emery passed away peacefully with loving family around her on Thursday, March 18, 2021, of causes incident to age. She was 93. She is survived by her two sons, Robert D. Herrick and Brian C. Emery, both of Santaquin, Utah, 14 grandchildren and 28 great grandchildren (with #29 on the way). She was preceded in death by her siblings George R. Dakin, Alfred E. Dakin and Mary M. Athan, and by her daughter Kimberly J. Emery.  She is also survived by many, much-loved extended family members, and more friends than can be counted. Alice was loving, warm and accepting, and made friends wherever she went. Many of those friends have become family to Alice and her family.

She was born to George Wilson Dakin, an administrator for the Southern Pacific Railroad, and Magdalena Cristina Chabert of Mexico City on July 6, 1927, in Mexico City, Mexico. She lived in Mexico City until age 5, with Spanish as her primary home language, when the family moved to Berkeley, California. Her father was fluent in English and Spanish, while her mother spoke English, Spanish and French. Alice graduated from Berkeley High School and attended College of the Pacific (now University of Pacific) in Stockton, California, majoring in music. She later received her Batchelor’s degree in Education from San Francisco State University.  She completed post graduate courses at a number of universities. She married Robert H. Herrick with whom she had a son.

Alice had a world-class mezzo-soprano voice and performed with the San Francisco and New York City opera companies, and starred in the title role in the West End Opera’s production of “Carmen”.  She also performed professionally in touring companies of various musicals, including Guys and Dolls, Carousel, Song of Norway, South Pacific, Oklahoma!, The King and I, Flower Drum Song, Showboat, Annie Get Your Gun, Hello Dolly, Paint Your Wagon, My Pal Joey, and the Sound of Music, among others. During her years at Pacific, she became close friends, “twin sisters” and roommates with actress Janet Leigh of “Psycho” fame, with whom she shared a birthday.

Facing life as a divorced mother, Alice made the decision to give up professional performance to raise her son, Bob, away from show business, for which he is eternally grateful. She returned to college and, after graduating, moved to Southern California and became an elementary and junior high school teacher, which she loved as much or more than singing. She taught bilingual classes at almost every grade level, mentoring many young underprivileged and/or Spanish speaking students who have returned to thank her years later. She married Daniel G. Emery and they shared two children, Kimberly and Brian. She also raised two granddaughters, Elaina and Jocelyn, from early childhood. She was a loving and devoted mother, grandmother and great-grandmother.

A life-long follower of Jesus Christ, Alice loved to sing in front of church congregations and to serve others.  She spent much of her life attending various churches seeking for more truth about the Savior.  She joined the Church of Jesus Christ of Latter-day Saints in 1970 and remained a faithful member of that Church and disciple of Jesus to her last breath.

Her family will miss her dearly, but we know that through the Grace of Jesus Christ, we will be with her again.

A funeral service will be held Monday, March 29th, at 11am at The Church of Jesus Christ of Latter-day Saints, 548 South 400 East, Santaquin, Utah. There will be a viewing at 10 am and a luncheon will follow the funeral services at the same location. There will be a graveside service at Hillside Memorial Park in Redlands, California at a later date, which will depend on information we won't have for a few more days. Although there are currently no Covid restrictions for funerals in Utah, we believe that we will be able to Zoom or YouTube the services for those who cannot travel or are uncomfortable with a large group during this pandemic. If so, a link will be available on the webpage for Brown Family Mortuary in Santaquin at brownfamilymortuary.com   There will also be an audio recording available on the mortuary website after the funeral.

To order memorial trees or send flowers to the family in memory of Alice Emery, please visit our flower store.