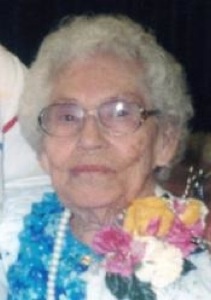 Our beloved mother, grandmother, great grandmother, sister and friend, Alice Emma Jasperson Hughes Fox, passed away October 9, 2011 in Spanish Fork surrounded by her loving family. She was born September 2, 1911 in Goshen to Stephen and Emma Stark Jasperson, the oldest of ten children. She grew up learning what hard work was and worked hard all her life. She married Bert Hughes February 25, 1932 and they raised five children. He passed away June 16, 1966.

Alice worked at the Provo Infirmary and as an aid in nursing homes for several years. She was an active member of the LDS church and held positions in the Primary, Sunday School, Cub Scouts and Young Women's.

Alice married Harold L. Fox December 1, 1966 and they lived in Eureka. Their marriage was later solemnized in the Manti LDS Temple. Together they served in the Provo temple for 18 years until Harold's death in 1988.

Her hobbies included quilting, crocheting, tatting, painting, cooking and serving others. She was loved and respected by everyone who knew her and will be missed by all.

Many thanks to the aids and staff at Spanish Fork Nursing and Rehab for their love and care of our mother and grandmother.

To order memorial trees or send flowers to the family in memory of Alice Fox, please visit our flower store.