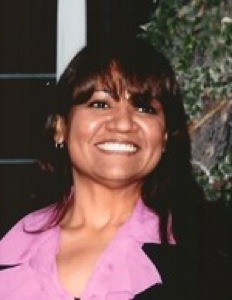 Anna Maria Munoz Hansen, our beloved mother, daughter, grandmother, sister, aunt, niece, cousin and friend passed away May 26, 2009 in Payson. She was born October 2, 1968 in Orange, California to Cecelia D. Munoz and Juan M. Munoz. Anna lived in California until 1984 when she moved to Santaquin. She graduated from Payson High School in 1987. She enjoyed traveling and lived in many places and made many friends. In 1993 she married Dennis R. Hansen. They moved to California and later to Hawaii. In 1996 they moved back to Utah and became foster parents for the State of Utah. Anna had many children come in and out of her life when she was blessed to have two children, Alisa Fillmore and Kaden Munoz Hansen. She loved all of her children very much. Anna and Dennis were later divorced. Anna was an active member of Christian Life Assembly of God Church in Payson where she was the secretary for some time. Anna was working at the Arby's in Payson as a sandwich maker. She loved her job very much and enjoyed bossing around her co-workers. Anna is survived by her parents, Cecelia D. Munoz of Hesperia, CA and Juan M. Munoz of Rialto, CA; her children, Kaden Munoz Hansen, Payson and Alisa F. (Justin) Marian, Payson; siblings, Juan M. (Alicia) Munoz, II, Hesperia, CA, April T. Munoz, Payson, Emily A. Jolley, Payson, Adam J. Munoz, Rialto, CA; nieces and nephews, Crystal K. Munoz, Isabelle V. Munoz, Juan M. Munoz, III, Marcos V. Munoz; and one grandchild, Haylee Marian. She is also survived by many cousins, aunts, uncles and foster children. Services will be held Tuesday, June 2nd at 11:00 am at the Christian Life Assembly of God Church, 11554 South 4600 West, Payson. Family will greet friends at the Holladay-Brown Funeral Home, 66 South 300 East, Santaquin, on Monday from 6 to 8 pm and Tuesday at the church one hour prior to services. Burial, Payson City Cemetery.

To order memorial trees or send flowers to the family in memory of Anna Hansen, please visit our flower store.