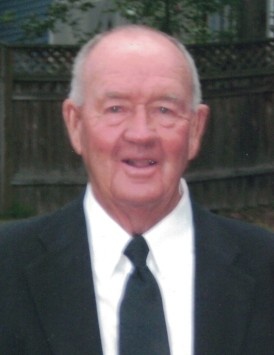 He was born to Lawrence Isaiah Jones and Essie Harris on April 5, 1928 in Lindon, Utah. He married Mary Kathyrn Marlin on July 25, 1949. They had five children. They later divorced. He married Debra Trelor on May 3, 2018.

Aralda was very well thought of and known by all as a very generous person.

Under his leadership as city council member and then mayor of Lynndyl, Utah, he was greatly involved in community service and in creating Lynndyl City Park.

He was an innovator, hard worker and all around handyman who could fix anything. One of his favorite sayings was, “A guy could…” and he did! He was instrumental in bringing in and restoring the Porter Rockwell cabin in Eureka, Utah.

He loved his children and grandchildren, and with them enjoyed picnics, parades, family times, and trains. He loved history and exploring.

His best friend was a dachshund named Sammy.

He was a member of the Church of Jesus Christ of Latter-day Saints.

Funeral services will be held Saturday September 28, 2019 at 10:00 am a the Summit Ridge LDS Church, 591 Summit Ridge Parkway, Santaquin, where family will greet friends from 9:00 – 9:45 am prior to services. Interment will follow in the Santaquin City Cemetery.

A big thank you to Lake Ridge Assisted Living, Bristol Hospice, and Legacy House Spanish Fork, Utah.  A very special thanks to the Brown Family Mortuary for the loving care they gave our family.

To order memorial trees or send flowers to the family in memory of Aralda Jones, please visit our flower store.