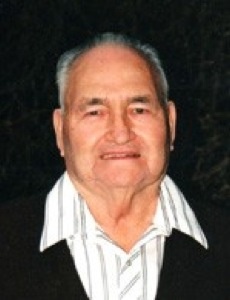 Click here to listen to a recording of the service

Arthur Lorenzo Hartvigsen Jr. our loving father, grandfather and great grandfather, passed away peacefully at his home Sunday, October 4, 2009. He was 86 or "halfway to 172" as he would say. He was born July 24, 1923 in Genola, Utah to Arthur Lorenzo, Sr. and Margaret May Thomas Burraston Hartvigsen, the 5th of 15 children. He married Norma Cazier on April 18, 1944 and they were sealed in the Manti LDS Temple March 17, 1962 and were married 58 years. His sweetheart, Norma, passed away April 7, 2002.

Arthur enlisted in the U.S. Navy at the age of 17. He proudly served his country for 4 years, 9 months and 7 days. He was at Pearl Harbor when it was attacked. He was assigned to the USS Medusa as a deep sea diver and a gunners mate. After the war, he worked at Geneva Steel for 33 years as an electrician. He also owned and operated a dairy and farm in Spanish Fork for over 30 years.

Arthur was a member of the LDS church, always faithfully serving. He and Norma served together in the Peoria, Illinois mission.

Funeral services will be held Thursday, October 8th at 11:00 am in the Old Santaquin Stake Center, 90 South 200 East. Friends may call at the Holladay-Brown Funeral Home, 66 South 300 East, Santaquin on Wednesday from 6 to 8 pm and Thursday at the church from 9:30 to 10:45 am. Burial, Goshen Cemetery with military rites.

To order memorial trees or send flowers to the family in memory of Arthur Hartvigsen, please visit our flower store.