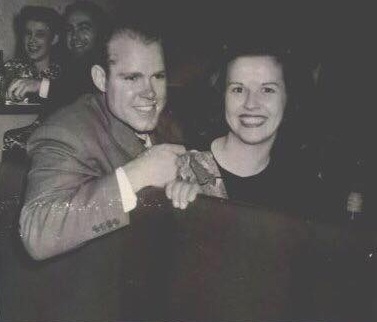 Barbara Althea Hansen Birdsall was born on September 27, 1926 to Thydais Hansen and Elda Leah Nielsen in Centerfield, Sanpete County, Utah. She was preceded in death by brother, Calvin Hansen and sister, Elaine Herensperger. She left this world peacefully on Sunday, December 31, 2017 in Springville, Utah at the age of 91.

Barbara met her sweetheart Ross L. Birdsall through her brother, Calvin, on a blind date. They married on March 16, 1949 at the home of the groom’s parents. Barbara worked at Hill Field (Hill Air Force Base) until and after their marriage. Upon graduation from the University of Utah,

Ross took a job with Sandia Corporation which took him to Albuquerque, Spokane, and Las Vegas. When Ross had begun working for Hughes Aircraft Company, they settled in Fullerton, CA residing for 55 years.

Barbara’s maternal grandmother was descended from pioneers who were married in the Nauvoo Temple and subsequently crossed the plains to Utah. Later in her life she dedicated many hours to family history.  She served a mission with her husband in the Salt Lake Genealogy Library as US/Canada Area Leaders from 1996-1998. In 1999-2005 She was assistant to Ross as the director of the Genealogical Library in Los Angeles, California.

Barbara was an avid reader, loved learning, and continued to pursue her education, obtaining her Associates Degree from Fullerton College in Spring of 1968. She loved Opera, classical music and theater and instilled in her children her appreciation of fine arts, literature and cooking that continued in her grandchildren and great grandchildren. She enjoyed teaching Cultural Refinement in Relief Society. Her creative streak shone when she wrote award-winning Roadshow scripts and edited musical numbers alongside her husband who directed them. She was a skilled seamstress and outstanding budgeter.

To order memorial trees or send flowers to the family in memory of Barbara Birdsall, please visit our flower store.