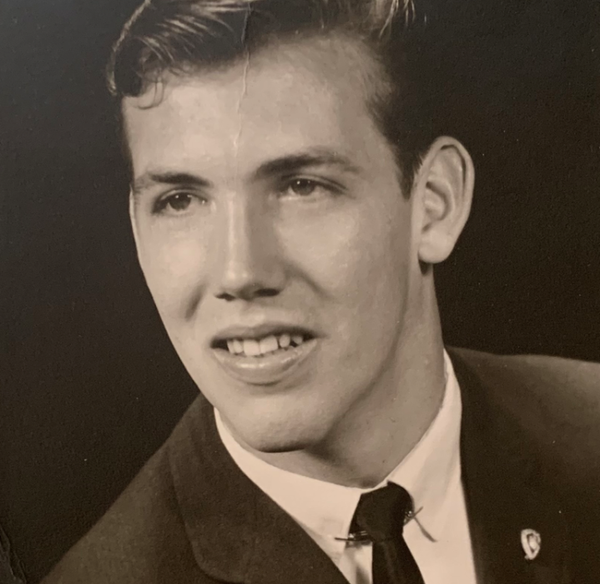 Altruism (noun): The principle and moral practice of concern for the happiness of others.

Bennie found purpose in befriending and lifting all around him, in particular the lost and lonely. A lifetime of service to others, especially the youth, will be his legacy. Known for addressing life’s difficulties with humor, Bennie left us joking all the way until the end.  Not many people knew that Bennie was a successful investor and left his family a huge inheritance, though time was his currency and his portfolio was filled with relationships.

Bennie lived with intention, the main theme being service, which can be found intertwined in his efforts throughout life. As a young man he served three missions for the Church of Jesus Christ of Latter-Day Saints: a labor mission in Salt Lake City building chapels, a 2.5 year proselytizing mission in Peru, and was also set apart as a missionary while serving in the Army in Vietnam.

Bennie served his country in the Army from January 3rd 1967 to December 18th 1968, where he received many awards including the National Defense Service Medal.

Bennie loved scouting and spent more than 50 years working with young men and their families. His tireless efforts were recognized with the Silver Beaver award. He had a penchant for bringing people together in great causes. One such event was the 50/20, a scouting fundraiser which he organized for many years, where participants were faced with the tortuous challenge of walking 50 miles in 20 hours. Some of his most memorable adventures were the week-long backpacking trips into the High Uintas leading Boy Scouts, often with his wife and kids in tow.

When Bennie was not camping with the scouts there was a good chance you could find him out on a ball field. Over the years he volunteered his time coaching countless youth across a variety of sports including: baseball, basketball, football, wrestling, and softball. He also enjoyed frequenting the local snack shack where the famous ‘Bennie Burger’ was born.

Bennie was always bustling in the community. He directed Fourth of July flag raising ceremonies, played an important role on the Library Restoration Board where he helped secure the beautiful stained glass window, and organized many other events.  If you ever needed to locate Bennie he was difficult to track down, but at the same time he seemed to be everywhere. You could say the same thing about his car keys.

A recent example of Dad’s care for his friends in the neighborhood was the weekly visits with his elderly and ailing friend, Mary Roberts, which typically involved foot rubs, lawn mowing, and the sharing of root beer or ice cream cones. Even on the day of his passing, he was trying to organize some assistance to help with her flower beds.

Bennie worked tirelessly to support his family and developed many talents in the various positions he held. Some of the more interesting jobs included, but were not limited to: owning a Spudnut doughnut shop, building homes in Japan, working at a butcher shop, maintenance manager, playing Santa Claus for Macey’s department store, forklift driver, newspaper delivery, rototilling, yard sale connoisseur,  marble installer, and wilderness counselor for troubled youth.

In his mid 50’s he found another passion which developed into a gift when he decided to return to school to become a massage therapist, eventually earning his Master’s degree in Medical Massage. As the owner of the ‘Body Shop’ he was relentless in his efforts to heal the body and the soul. He continued to massage well past retirement age, with his last massage occurring two days before his death. His calendar was typically booked three months in advance, clients sometimes coming from across the country. Bennie prioritized healing over the cost of a typical massage, and gladly accepted Mexican candy, yard work, or an IOU for payment.

Bennie Allen Lee was born on March 6th 1945 in Oakland Alameda California to Robert Charles Lee and Mary Ernestine Muckleroy.  At the age of 13 months, his younger brother Ronald Joe was born. A short time later, Glen Muckleroy was born to his Grandmother Muckleroy, and the threesome were just like brothers.  Glen’s sister Grace loved them like her play-dolls.  In his younger years Bennie’s family moved back and forth between California and Texas, before eventually settling down in Norwalk, California.  When Bennie was in his pre-teens his mother remarried, a wonderful man, Bryce Wayne Julius, whose care and gentle hand helped to shape Ben’s development.

In 1981 Bennie and Carol moved to Santaquin Utah, and later built a beloved cabin in Hideaway Valley, UT.

At the end of a long day, Dad enjoyed falling asleep while watching old television reruns or spaghetti westerns. The kids all knew they could stay up late to watch Night Court or M.A.S.H. for the price of a foot rub.

"Life should not be a journey to the grave with the intention of arriving safely in a pretty and well preserved body, but rather to skid in broadside in a cloud of smoke, thoroughly used up, totally worn out, and loudly proclaiming" Wow! What a Ride! ” - - Hunter S. Thompson

Night of Memories:  The family would like to invite all who knew Bennie to join us for a casual outdoor gathering to reminisce.

*No Viewing Service will be held

To order memorial trees or send flowers to the family in memory of Bennie Lee, please visit our flower store.