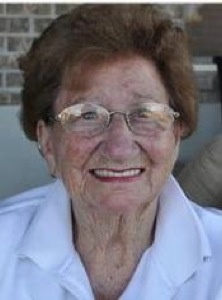 Betty May Bell died peacefully in her sleep on June 13, 2013 from natural causes. She was born on July 22, 1922 to Peter and Edith Walker in Lowestoft, England.

Betty and her family immigrated to Quebec, Canada when she was two years old. She spent her childhood in Kenogami, Quebec with her parents and two siblings Kathleen and Donald.

On August 24, 1945 she married her sweetheart, John Edward Bell. They spent 57 loving years together in Toronto, Canada. They were blessed with one child, Penelope Ann, who was the light of their lives.

Betty was a compassionate, dedicated Registered Nurse in Toronto, Canada for many years. She worked until she was 71, ending her fulfilling career at Baycrest Hospital. From her great example as a nurse, her daughter and three of her granddaughters pursued nursing careers to follow in her footsteps.

Shortly after the death of her husband, she joined the Church of Jesus Christ of Latter Day Saints, at the age of 81. One year later, in 2004, she was sealed for eternity to her husband, and her daughter in the Mt. Timpanogos Temple.

In 2009 she moved to Saratoga Springs, Utah to be surrounded by her loving family, where she was loved and adored by her sixteen great grandchildren. During the past four years she has been given exceptional love and care by her daughter and son-in-law. Penny, as her only child, met her every need and went above and beyond to provide comfort, happiness and all the little extras she could think of to ensure a great quality of life for Betty in her final years.

Our Nonnie was a devoted, loving, mother, grandmother and great grandmother. She was known for her generosity, unconditional love and tireless sense of humor up until the very end. She will be missed greatly by all.

To order memorial trees or send flowers to the family in memory of Betty Bell, please visit our flower store.