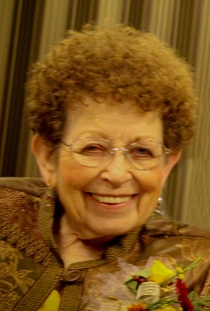 Betty was a master seamstress who willingly shared her exceptional talents with not only her family, but also with the people and schools in her community and many, many others throughout Utah and the United States.

She was proud of her Icelandic heritage, travelling to Iceland on three different occasions.  She crafted traditional Icelandic costumes for the 2002 Winter Olympics using authentic Icelandic fabric and findings obtained during her travels.
Her legacy will live on not only through her children and grandchildren, but also in the countless masterpieces she lovingly and expertly created with needle and thread.

Funeral services will be held Saturday, July 9, 2016 at 12:00 noon at the Eureka, Utah LDS Church, where family and friends will gather from 9:30 to 11:45 am prior to the services.  Interment will be in the Salem City Cemetery under the direction of Brown Family Mortuary, Santaquin.

To order memorial trees or send flowers to the family in memory of Betty Robinson, please visit our flower store.