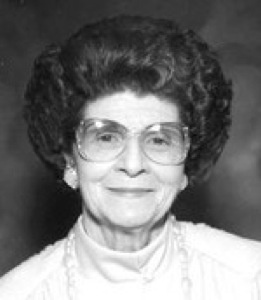 Betty Lou Kay Tuckett was taken from us on January 20, 2009 from a massive stroke. She was born August 27, 1922, in Santaquin, Utah, to Hyrum R and Vivian Openshaw Kay. Betty Lou grew up in Santaquin and graduated from Payson High School in 1940. She married Jean A. Tuckett, August 6, 1942. He was a widower with two small boys: Roger and Gordon who she raised as her own. Jean passed away June 24, 1987. Later Betty was sealed to Jean in the Salt Lake Temple March 2, 2002. Betty was a marvelous cook and homemaker. She learned to drive when she was 65. She served for 20 years as a volunteer and site manager of the FNE Senior Center where she was loved and admired by all who met her. She was appreciative of everything she had. She leaves a legacy of love and caring for all whom she knew. Like her mother she always exhibited an air of nobility and graciousness. She is preceded in death by her parents, two brothers, Max and Elgie Kay and a sister Verla Kay Henry. Betty is survived by two sons: Roger, Vancouver, Washington; and Gordon, Pavillion, Wyoming; daughter-in-law Marcia Tuckett, three grandchildren Mark Tuckett, Janna Jacobson and Shelly Steinlein, four great-grandchildren all of California; many nieces, nephews and cousins. Betty loved and appreciated her home teachers and the members of the Ivins ward where she served in many callings. She loved and appreciated her caring neighbors and friends. Thanks to her nephew Gary and his family for their love and devotion. Betty requested no funeral or flowers. Please donate to a favorite charity. A Graveside service will be held at the Santaquin Cemetery, Saturday, January 24, 2009 at 11 a.m. where Betty will be buried with three generations of her family.

To order memorial trees or send flowers to the family in memory of Betty Tuckett, please visit our flower store.