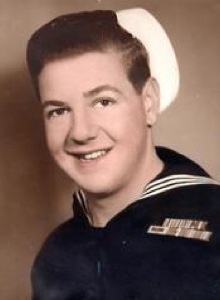 William Elmer Morris was born April 4, 1926 in Eureka, Utah to Bill and Nellie Duncan Morris. He passed away February 18, 2013 at the Central Valley Hospital in Nephi surrounded by those that he laughed with, lived with, and loved.

After Bill graduated from Tintic High School in 1944 he was quick to join the military serving in the US Navy on the USS Tallage Destroyer during WWII. He enjoyed telling his family his "Navy stories" throughout his life. When he returned home he fell in love with Joan Dalton and they were married June 12, 1949. Later they bought a home on Church Street in Eureka where they raised their children. Bill and Joan lived all their married life together in Eureka and 61 years in the same home.

In his earlier years he served as local union president of the United States Steel Workers. He was active in the local American Legion post, a life-long member of the Elks, and a member of the Senior Citizens of Eureka. He was a giving man and spent many hours earlier in his life helping the widows and those in need of help. Bill was a miner in the Tintic Mining District for many years. His knowledge of mining and the history of the Tintic Mining District were immeasurable. Many of his later years were spent at the Eureka Mining Museum where he would openly share his knowledge of the area and the local mines. Bill loved the outdoors and loved to hunt and fish. He had many wonderful memories of spending time outdoors with his family and friends. In his spare time he worked in his garage creating bird houses and many other things made from wood. He love to gather wild flowers from the hills and then try to plant them in the yard to enjoy in the spring. The front porch was one of his favorite spots, sitting there with a cup of coffee in the evenings watching his humming birds, the spring rain, and the sun setting on the mountains.

Bill was preceded in death by his parents. He is survived by his wife of 63 years, Joan Dalton Morris. He was very proud of his three daughters, Mickie Thompson (Gaylon) of Globe, Arizona, Jackie Mitchell (Dennis) of Spanish Fork, and Amy Morris (Annie Kitty) of Bremerton, Washington. He has seven grandchildren, six great grandchildren and many nieces, nephews, and many good friends. He was a wonderful husband, father, grandfather, great grandfather and will be sorely missed by his family.

The family would like to thank his home health care nurses, Kris Kropen, Dr. Rasmussen, and the staff at Central Valley Hospital.

Funeral services will be held Friday, Feb. 22nd at 11:00 am at the Eureka LDS Chapel. Family will greet friends on Thursday from 6 to 8 pm at the Brown Family Mortuary, 66 South 300 East, Santaquin and at Friday at the church from 9:45 to 10:45 am prior to services. Interment will be in the Spanish Fork Cemetery with military rites by the American Legion. Condolences and memories may be shared with the family at www.brownfamilymortuary.com.

Bill was a miner that found his wealth in his family.

To order memorial trees or send flowers to the family in memory of Bill Morris, please visit our flower store.