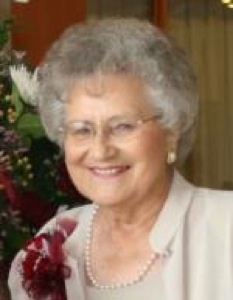 Bonnie Wilde Sparrow Laird, 82, of Eureka, Utah passed away on August 12, 2010. Bonnie was born August 29, 1927 in Mammoth, Utah to Clarence and Louise Bauer Wilde. She was the second oldest of fourteen children. Bonnie spent her early childhood years in Eureka until moving to Dividend at the age of eight. Bonnie attended schools in Goshen and Payson, where she graduated in 1945.

Bonnie was a very loving wife, mother, grandmother, sister and friend. She was known for her quick-witted personality and her unconditional love toward others. Throughout her life she was an active member of the Church of Jesus Christ of Latter-day Saints where she served in many different callings. Bonnie was active in many community clubs and particularly enjoyed sewing, doll collecting and spending time with her family. Bonnie was a devoted fan of the Utah Jazz and a loyal viewer of The Price Is Right. Bonnie retired from Tooele Army Depot after working 19 years. She did everything from driving forklift to painting army tanks. Bonnie valued the many long-lasting friendships with her coworkers.

Funeral services will be held Wednesday, August 18th at 11 am at the Eureka LDS Ward Chapel, 70 E. Main Street. Friends may call Tuesday from 6-8 pm at the Holladay-Brown Funeral Home, 66 South 300 East, Santaquin, and on Wednesday from 9:45 to 10:45 a.m. at the church prior to services. Interment, Payson City Cemetery.

To order memorial trees or send flowers to the family in memory of Bonnie Laird, please visit our flower store.