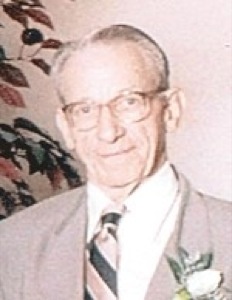 Carlos “Jake” Jacobson returned to his Heavenly Father August 27, 2008. He was born May 16, 1927 in Santaquin, Utah. He was one of seven children born to
He was a Veteran of the US Army and retired from Geneva Steel.
Jake is survived by his wife, Roberta, of sixty years, three children, four grandchildren, six great-grandchildren and two brothers. He was preceded in death by his parents, three sisters, one brother and his eldest son, Doug.
“The boys will meet you at the first tee.”
Friends and family will gather at the Holladay-Brown Funeral Home, 66 South 300 East, Santaquin on Saturday, August 30, 2008 at 10:00 a.m. Graveside services will follow at
11:00 a.m. at the Santaquin City Cemetery.
Condolences may be sent to the family at 920 S. 1680 E., Pleasant Grove, UT 84062.
To order memorial trees or send flowers to the family in memory of Carlos Jacobson, please visit our flower store.