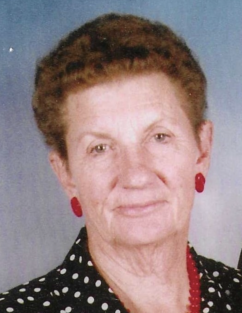 Carma Rose Finch Burraston Bell Bauer was born on September 11, 1929 in Payson, Utah, to Rulon and Nellie May Stickney Finch. Joining her siblings George and Maurine to complete their family. They worked hard and played hard together, to become productive people in life.


Carma married Boyd Jay Burraston, in Salt lake City on February 2, 1949. They were later sealed on October 24, 2014. They raised 3 children, Brenda, Jay, and Kurt, in Goshen. She lived a productive life and taught her children to do the same.


After her children were grown she became the Postmaster in Goshen and was the Postmaster there for over 30 years. She became a part of people’s lives in our community. She saw letters sent to and from soldiers serving war time. She made sure each child who wrote a Santa letter got a personal hand written letter back from Santa before the special night. She helped in any way she could in the community.


Boyd passed away in November of 1977 and she was widowed at 48. She carried on with her life making the best of it. She then married Merrill Bell, (later divorced). She then married Loren Eugene (Gene) Bauer, on March 24,1994. They enjoyed many years together, traveling, spending winters in California,  summers in Goshen, and golfing. Gene also past away.


Mom was a busy, hard working and kind person. Here are some traits we remember about her, a hard worker who hoed beets as a young teenager, loved to ride horses, she loved to flirt with anyone old or young, liked to square dance, enjoyed hunting deer and was a good shot, was a world traveler, generous to the needy. Here passions were her antique cars (of which she has 3), sewing machines and anything old. She loved her family. She is a member of the Church of Jesus Christ of Latterday Saints.


Services for Carma will be held Monday July 18,2022 at the Goshen Ward Chapel, 50 South Center, Goshen. A viewing will begin a 9:00 - 9:45 a.m. with the services starting a 10:00 a.m. Burial will be in the Goshen Cemetery following the services. A light luncheon will be provided after.

Due to internet connection issues there will not be a livestream of the services. The audio will be available on this page within a couple of days. Sorry for the inconvenience.

To order memorial trees or send flowers to the family in memory of Carma Bell Bauer, please visit our flower store.