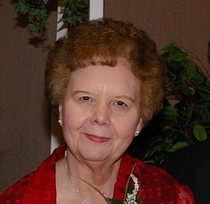 Carol Emma Watts Isaacson passed away peacefully at home February 10, 2017.  She was born October 3, 1932 in Ephraim, Utah to John Clayton and Mary Christiana Thomson Watts the sixth of ten children.

Carol spent her early years in the Sanpete area attending various schools.  Her family moved to Orem where she graduated from Lincoln High School in May 1950.  She participated in choir, drill team and played the clarinet in the band.

She met her husband, Merlin Dee Isaacson, in high school.  They were married in the Salt Lake LDS Temple May 19, 1950.  She and Merlin were blessed with four children.

Carol enjoyed music, rides in the canyon, her collections, her children and grandchildren and just being with her sweetheart.  She was a member of the Church of Jesus Christ of Latter-day Saints and served faithfully  in all her callings throughout the years.  She loved to attend the temple!

Many thanks to the staff at Stonehenge Skilled Nursing & Rehabilitation Center and Canyon Hospice, especially Heidi and Lisa.

To order memorial trees or send flowers to the family in memory of Carol Isaacson, please visit our flower store.