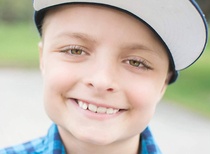 Carter Chad Sperry, age 10 of Santaquin, Utah was welcomed into the arms of his Lord and Savior, Jesus Christ on August 4, 2016 after an eleven month battle with cancer.

Carter was born February 24, 2006 in Orem, Utah to loving parents, Chad and Alicia (Sehy) Sperry but lived the majority of his life in Santaquin, Utah where he was a 4th grader at Santaquin Elementary.

Carter was a big brother to Brooklyn and Gavin.  He was a happy and outgoing boy who enjoyed living life to the fullest.  He loved hiking with his Dad, reading with his Mom, wrestling with his brother, watching movies with his sister, camping and fishing with his grandparents, cooking with his cousins and spending hours with his friends.  He had a passion for Legos, riding his motorcycle, boxing, Cheetos, UNO and all things BYU.  He especially loved teasing non-BYU fans like his Grandma and at times could be quite the prankster!  He enjoyed climbing trees, canoeing, rollercoasters, waterslides, riding 4-wheelers and participating in scouts.  Some of his fondest memories were spent in Alaska, Hawaii, California and in Koosharem, Utah.  He had dreamed of becoming a physical therapist at a children's hospital because of the love and admiration for all of the therapists who worked with him throughout his journey.

Services will be held at 12:00 pm Monday August 8, 2016 at the Santaquin LDS Stake Center, 45 So. 500 West, with Bishop Charles Elder of the Santaquin 7th Ward conducting.  A viewing open to all will be held at the Stake Center from 10:00 am to 11:30 am Monday morning prior to the services.  Burial will be in the Santaquin City Cemetery.  In lieu of flowers, the family is asking for potted plants so they can be planted later in their yard as a living reminder of Carter.  They also wish to express their gratitude to everyone who had loved, supported and served their family over the last eleven months.

To order memorial trees or send flowers to the family in memory of Carter Sperry, please visit our flower store.