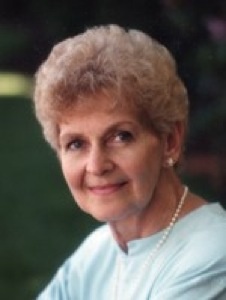 Clara Rosalia Borgeson Goudy of Santaquin, Utah passed away January 4th, 2010 and rejoined her loving husband. She was born in Murray, Utah on March 16, 1928 to Andrew Alvin Borgeson and Johanna Van Tussenbroek. She was raised in Santaquin in a large family of five sisters and one brother. Clara attended Payson High School and graduated from BYU Academy. Later she attained her B.A. in accounting from Brigham Young University . Following her graduation, she served in the Netherlands as a missionary for the LDS Church . Following her mission, she fell in love with and was sealed to Donald Ray Goudy for eternity in the Salt Lake Temple on November 23, 1955. They lived in Salt Lake City and Millcreek Canyon before relocating to Santaquin when Don retired. Clara opened her heart and home to all in need. She gained the respect of all as she spent years in compassionate and dedicated service to her husband Don, her son Donald Ray Jr., and her daughter Heather during their illnesses. Throughout Clara's life her testimony of our Savior was reflected in the service she rendered to family, church, and community. Clara was preceded in death by her parents, husband, sister Jo Marie (Borgeson) Bray, son Donald Ray Jr. ( Sharon ) Goudy, daughter Heather (Goudy) Ennis, son-in-law Roger Ennis, and grandson Brent Goudy. She is survived by her children Tom (Debbie) Augustus, Debbie (Mark) Erickson, Daniel (Karla) Goudy, Janell (Tim) Luscher, Andrew (Keela) Goudy, Holly (Dan) Joseph, Jordan (Marylynn) Goudy, daughter-in-law Sharon Goudy, 33 grandchildren, 6 great grandchildren, and her siblings Lavina Borgeson, Nell (Wes) Morgan, June (Bill) Hubner, Andrew (Julie) Borgeson, Carolyn (Gerald) Shelley. Funeral services will be held in her honor at 11:00 a.m. Friday, January 8th at the Santaquin North Stake Center , 545 N. 200 E. Santaquin. The viewing will be held on Thursday January 7th from 6-8 p.m. at the Holladay-Brown Funeral Home 66 South 300 East, Santaquin and again on Friday from 9:30-10:45 a.m. at the Stake Center . Interment will be at Santaquin City Cemetery . The family extends their gratitude to all who have shared time and love with the family. It is requested in lieu of flowers that your time & money be spent with your family to create a lasting memory.

To order memorial trees or send flowers to the family in memory of Clara Goudy, please visit our flower store.