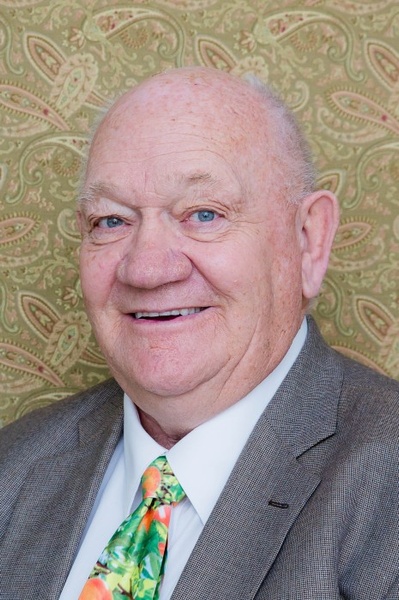 Claude Alvin Rowley left his earthly home on February 23, 2019 to join his beloved sweetheart, Karen, who left us a short 23 days earlier. He was born on March 7, 1936 in Orem, Utah to M. Alvin and Myrtle Bigelow Rowley. Claude and Karen were married on August 14, 1958 in the Salt Lake Temple for time and all eternity.

Claude’s vocations in life started with his service in the United States Army followed by 15 years as a teacher at Santaquin Elementary School.  He was a gifted teacher.  He strengthened, encouraged, and instructed those he was called upon to teach whether it was in school, church, seminary, prison, or the cherry plant, but more importantly at home with his children and grandchildren.  He lifted and inspired all those he taught.

With the purchase of land in Santaquin in 1957, Claude embraced his passion for farming.  His family and orchards grew and blossomed together, from multiple orchards in southern Utah County to orchards in southwest Idaho.  Farming allowed him to teach his family the art of hard work and the importance of working together.

Claude was a leader in the tart cherry industry.  He assisted in the original development of sales and marketing of dried tart cherries.  His leadership helped guide the national tart cherry industry for over 30 years.   He served on several agricultural industry boards including Cherry Central based in Michigan and Intermountain Farmers Association based in Utah.   In 1995, he was honored as National Cherry Man of the Year.  His professional career took him to many boardrooms and cherry processing facilities.  However, his passion was walking or riding a four-wheeler in a cherry orchard.  He had a talent for growing cherries.

Claude cherished his membership in The Church of Jesus Christ of Latter-day Saints where he served in numerous callings.  He enjoyed serving multiple missions with his sweetheart including Girls’ Camp Facility missionaries and on the Hurricane Welfare Farm. Claude and Karen enjoyed their time together serving in the Provo Temple baptistry. He was always faithful and willing to serve in whatever capacity he was asked.

Claude always spoke directly and was never afraid to state his point of view. However, underneath he had a kind heart and genuine concern for others.  He taught his posterity how to cut hair allowing them to learn on him where mistakes were not so noticeable. He loved sports, participating in football, softball, and skiing in his younger years.  He was an avid fan of his children, grandchildren, BYU, and the Dodgers.  He and Karen were always keen for a card game and spent many fun-filled hours playing with children, grandchildren, and friends made during their missionary years in Hurricane.  Claude and Karen loved gathering their family, spending time together, cherry season, family traditions, and working together. Family was important and sharing time together was something they made a tradition and priority.  The importance of serving others was constantly taught and more importantly exemplified.

He was preceded in death by his sweetheart of 60 years, Karen Terry Rowley; his parents, M. Alvin and Myrtle Bigelow Rowley; a sister, Ann Davis; a grandson, Christopher Rowley; and a great-grandson, David Rowley.

Funeral services will be held Friday, March 1, 2019 at 11:00 AM at the Santaquin North Stake Center of The Church of Jesus Christ of Latter-day Saints, 545 North 200 East.  A viewing will be held Thursday, February 28 from 6:00 to 8:00 PM at the North Stake Center and again on Friday, March 1 from 9:30 to 10:30 AM prior to funeral services.  Interment will follow at the Santaquin City Cemetery.

In lieu of flowers, donations may be made to The Church of Jesus Christ of Latter-day Saints Humanitarian Aid Fund.

To order memorial trees or send flowers to the family in memory of Claude Rowley, please visit our flower store.