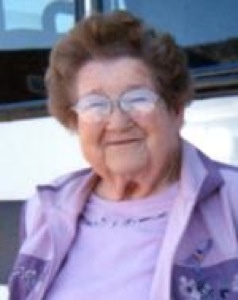 Cleo was born April 2, 1921 in Monarch, Utah. She grew up in Spanish Fork and graduated from Spanish Fork High School. In 1939 she married Gordon Jones in Salt Lake City. They had two sons, Raymond Jones (Mignon) of St. George and Vernon Jones, deceased, (Judy) of Eureka. They later divorced. In 1947 she moved to Eureka and in 1949 she married Tom Judge. They had two daughters, Alice Villamar (Nilo) of Las Vegas and Eileen Stewart (Miles) of LaBarge, Wyoming.

In 1949 Cleo and Tom purchased and operated the Summit Drive In. Cleo was a successful business woman. She also built and managed a laundromat and a beauty salon. When she retired she purchased the Gatley building (an antique store). She wanted to stay busy and it was a great way to meet and visit with people.

Cleo enjoyed music, dancing and traveling. She loved her family and was active in their everyday lives. She encouraged her sons to take guitar lessons and was involved with them in Boy Scouts. After having her two daughters she became a Girl Scout leader and was a life-time member of the Girl Scouts. She was very active in the community. She was the past president of PTA, the Lady Elks and the American Legion Auxiliary. She was a charter member of the Tintic Historical Society, a member of the Entre Novies Club and the Daughter of the Utah Pioneers. She served on the board of Mental Health, the Nephi Hospital Board and she served for 18 years on the Tintic School Board.

A celebration of her life will be held Thursday, June 24th at 1:00 pm in the Tintic Elks Lodge in Eureka where family will greet friends beginning at 11:00 am. Burial will follow at the Eureka City Cemetery.

To order memorial trees or send flowers to the family in memory of Cleo Judge, please visit our flower store.