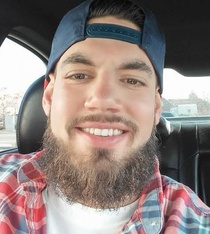 Cody McLain, beloved son, brother, grandson, cousin and friend, was born July 5, 1989 in Walnut Creek, California to Delaine Elizabeth Askelson and Joel Patrick Farnham.  He spent his childhood in Manteca, California where he played baseball, football, and was a member of the scouting organization. When he was in 7th grade, he moved with his mother to Utah, where they resided with his grandparents.  He attended East High School and East Hollywood High School.

The name Cody, meaning “helpful, takes responsibilities seriously, loves the comfort of home, and against life is always positive, comfort you’, was given to his mother as an inspiration when she was in 5th grade.  It was very fitting, indeed.  Cody has always been admired by his friends and family.  He went out of his way to make sure those around him were happy and taken care of.  He was known as the “protector” of his loved ones.  At work, Cody was very respected by his peers and boss.  He never abused his responsibilities at work and was always willing to help others improve.  Cody had a big heart and was full of love for his family and friends.  There wasn’t a moment in his life where his love didn’t shine through to others.  He felt a keen responsibility to help his brother become a better man, as well as countless others.  Even in the most unusual places…he was a strong light that led others to choose a better life.  Cody was an incredibly organized, beautiful boy. Watching him grow into a caring, giving, protective man was truly a delight to see.  He had an infectious smile, laugh, sense of humor, and charm.  He was an angel in the lives of many here on earth.

His physical life was cut short on Sunday, October 2, 2016 by a tragic accident that left many shocked and heartbroken.  As members of the Church of Jesus Christ of Latter Day Saints, we know we will see him again with open arms and big smiles.  We also know that he is happy, and that he can and will continue to be a guardian angel to all those who need him.  He will always be our “Protector” and a “Brother to the Brotherless”, as he was here. We will never forget, or stop loving our angel, Cody.

As one of Cody’s best friends stated:
“Why do all the best people die?”
“Because when you are in a garden, which flowers do you pick?”
“The most beautiful ones.”
“Exactly.”

He is survived by his mother and father, Delaine Askelson & Joel Farnham; his brother, Christopher James Askelson; his grandparents, Dorine & David Askelson and Debra & Bill Adams; and his bonus brother, Karsten Hunt…as well as anyone else who considered him a brother, which I know is many.

There will be a viewing at the Brown Family Mortuary, 66 South 300 East, Santaquin on Saturday Oct. 8th from 11:00 am to 12:30 pm followed by a graveside service at the Santaquin City Cemetery at 1:00 pm.
To order memorial trees or send flowers to the family in memory of Cody Farnham, please visit our flower store.