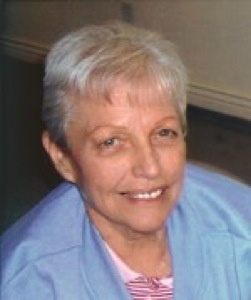 Colleen Fox White passed away August 11, 2008 at the age of 68. She was born March 30, 1940 in Eureka, Utah. She was preceded in death by her parents Harold and Larue Jex Fox and two brothers, Baby Harold and Duane Fox. She graduated from Tintic High School where she was a Cheer Leader and a member of the Marching Band. She attended Stevens Henager College and UVSC. Colleen had many accomplishments throughout her life. She worked for the Catalina Sewing Factory in Nephi as a talented seamstress. She also worked 11 years for Kennecott Copper in Eureka as a Secretary/Buyer for the mining industry and 6 years as a Medical Secretary for Dr. Dennis Remington before retiring because of symptoms associated with Multiple Sclerosis. She married her first husband Jerry Montoya in 1959. They lived in Italy and traveled throughout the region for 3 years while Jerry was stationed there in the Military. They later divorced. She then married Phil White in 1964 and they were sealed in the Manti Temple in 1987. They made their home in Goshen where she was very active in the community spending many years involved in the 4H program as a member and leader. She was also a member of the Goshen Valley Riding Club and the Lady Fireman Auxiliary. She enjoyed doing arts and crafts and loved going to Yuma, Arizona in the wintertime. She was an active member of the LDS Church and served in many church callings. In 1995 they moved to Spanish Fork where they now reside. She is survived by her husband Phil G. White, stepmother Alice Fox and children, Gaye (Bert) Jensen, Green River, Wyoming, Bryan K. White, St. George; two step sons, Allen E. White, and Joel Craig (Tweety) White, both of Las Vegas; 12 grandchildren and 2 great grandchildren. Funeral services will be held at the Goshen LDS Chapel, 70 So. Center, on Friday August 15th at 12:00 noon. Friends and family may call Thursday from 6 to 8 pm at the Holladay-Brown Funeral Home, 66 South 300 East Santaquin and Friday from 10:30 to 11:45 am at the church. Interment will be at the Goshen City Cemetery.

To order memorial trees or send flowers to the family in memory of Colleen White, please visit our flower store.