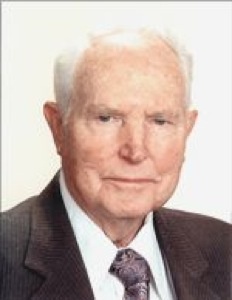 Our dad, grandpa, brother, uncle, and friend, Darwin J. Robbins, died Wednesday, November 14, 2007 , at his home with his family at his side. He was born on January 8, 1921 in Santaquin to Wesley Burtis and Emma Jane Jameson Robbins, the sixth of seven children. He lived in Santaquin his entire life and served as Grand Marshal in the Santaquin Days parade several times. He graduated from Payson High School in 1940 where he participated in various sports and played in the marching band. Darwin married his neighbor Dona Roper January 31, 1942 in the Manti Temple . Darwin and Dona made their home in Santaquin where they had two daughters, Dona Joyce and Loraine. Only two months after Loraine's birth and at the age of 22 Dona died (August 22, 1945) leaving him lonely and in despair. His parents helped him raise Joyce until his father's death in 1950 at which time his mother continued to help him care for Joyce. Darwin 's sister and her husband (Laura and Paul Ronnfeldt) raised Loraine. Three years later on July 10, 1948 he married Gladys Weight who had a young daughter, Marie. Together they had six boys (Val, Wesley, Stanley, Sherl, Glade, Mark) and two girls (Julie, Susan). Their marriage was solemnized in the Provo Utah Temple on April 21, 1973. In his youth he helped his father shear sheep and work on the family farm. This was the beginning of his love for farming. He acquired land of his own where the family spent many hours hauling hay, milking cows, irrigating crops, and raising animals. One of his greatest loves was raising and riding Arabian horses. He was a member of White Pine Riding Club. He attended and participated in many horse shows where he received many trophies and ribbons. He loved family activites which included outings of fishing and especially hunting with his boys. He loved telling the story about the time he shot a black bear. He and Gladys were musical and formed a family band in which he played the harmonica. When his grandkids visited they could expect to feel a tickle on the ear from a weed or a feather as he loved teasing them. He looked forward to Sunday evenings when children and grandchildren gathered in the front room to talk, laugh, and play. He always loved to dance and could be seen at Mark's Western Dance Club on Saturday nights. Darwin worked for the fire department at Fort Douglas and also served on the original Santaquin volunteer fire department. He later worked as an Instrument Repairman for Geneva Steel for 39 years retiring in 1983. He was a member of the Church of Jesus Christ of Latter-Day Saints where he served in the Elders Quorum Presidency, as Explorer Advisor, Sunday School Superintendent, High Priest instructor, Stake Clerk, and home teacher. He is survived by 11 children, Joyce (Max) Hancock, Tooele; Marie (Kirk) Reid, Layton; Julie (Earl) Sutherland, Nephi; Susan (Steven) Averett, Mapleton; and from Santaquin: Loraine Robbins Ronnfeldt, Val (Judy); Wesley (Lynn); Stanley (Virginia); Sherl (Bonnie); Glade (Kellie); Mark (Ruth); 52 grandchildren, 59 great-grandchildren; and one sister, Geneal (William) Stickney, Payson. He was preceded in death by his mother and father, two brothers-Melvin and Loren, and three sisters-Novella Clark, Elvirn Chapple, Laura Ronnfeldt, and one grandson, Daniel Robbins. Funeral services will be held Tuesday, November 20th at 11:00 am in the Santaquin Stake Center , 45 S. 500 W. Viewing will be Monday evening, November 19th at the Stake Center from 6:00-8:00 pm and Tuesday morning from 9:45-10:45 am. Burial will be in the Santaquin City Cemetery under the direction of Holladay-Brown Funeral Home, Santaquin.

To order memorial trees or send flowers to the family in memory of Darwin Robbins, please visit our flower store.