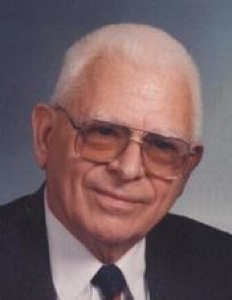 David T. Ingerson, age 87, passed away Saturday, October 6, 2012, in Springville, Utah. He was born June 11, 1925, in Bangor, Maine. He was the first child of Earle Ingerson and Thelma Sawyer. He married Margaret Witham on April 26, 1947. They lived in Maine, Massachusetts, and New Hampshire prior to moving to Utah in 1994 to be closer to family.

David enlisted in the United States Marine Corps in 1942 and served until 1951. He was a veteran of World War II and the Korean War. David joined the Church of Jesus Christ of Latter-Day Saints in 1957, in Bangor, Maine. He was very active in the church and held numerous positions. David was also very active in his community, participating in several associations and committees. David had many occupations during his life time. The majority of his career was spent working in the New England area as a sales representative/manager for electrical lighting suppliers. David was an avid fisherman. He loved fishing for brook trout in Baxter State Park and Katahdin Iron Works, in Maine. He loved going for rides and exploring the "farm country". He was a huge baseball fan and the Boston Red Sox were his favorite team. David is survived by his wife of 65 years, Margaret; five children, Bonita LeBlanc, Daphne Ingerson, Julie (Ronald) Rideout, Ernest Ingerson, and Logan (Ellen) Ingerson; ten grandchildren, Matthew LeBlanc, Judith (Jeff) Arsenault, Brandon Rideout, Ronald (Andrea) Rideout, Daniel Ingerson, Jacob Ingerson, Joshua Ingerson, David Ingerson, Afton Ingerson, and Spencer Ingerson; seven great-grandchildren, Deanna LeBlanc, Kasey LeBlanc, Abby Arsenault, Travis Arsenault, Kyle Arsenault, Cooper Rideout, and Jackson Rideout; and two sisters, Patricia Ingerson and Dearle Flint. David was preceded in death by his parents, Earle and Thelma; his brother, Norman; and one grandchild, Byron Sumner.

Services will be held Thursday, Oct. 11th at 11:00 am at the Springville 3rd Ward, 355 East Center. A viewing will be held at the church on Wednesday from 6 to 8 pm and Thursday from 9:45 to 10:45 am prior to services. Interment with military rites will be in the Springville Evergreen Cemetery under the direction of Brown Family Mortuary, Santaquin. In lieu of flowers, memorial contributions can be made in David's name to LDS Philanthropies, Missionary Fund, 15 E. South Temple, 2nd Floor East, Salt Lake City, UT 84150.

To order memorial trees or send flowers to the family in memory of David Ingerson, please visit our flower store.