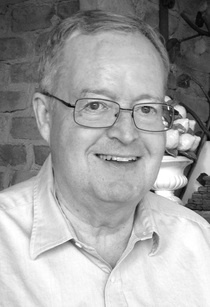 Delwyn Roche Wheeler Jr. (75) began his life May 24, 1941 on a small farm in the Blackfoot area of Idaho, the oldest of 11 children.  Born to Delwyn Roche Wheeler, Sr. and Mary Caroline Hill.  Del learned to work early on and even drove the family farm truck when he was just 5 years old, by sitting on two Montgomery Ward catalogs, because they couldn’t afford a hired man.

Growing up Del spent most of his time hauling hay, weeding, moving pipe and chopping sugar beets.  He enjoyed it so much that he made sure he got into a different profession later in life, (Masters Degree in Electrical Engineering working at IBM and StorageTek).  He also developed a great love of music, particularly the piano, which continues to positively influence many generations.

At 19, with barely enough money, Del ventured out to the central states on an LDS mission where at one time he reluctantly became the unofficial Relief Society president, until they were able call one.

Just one day after returning home from his mission, he was borrowing a typewriter at a kitchen table in a girl’s apartment, when in walked a pretty blonde named Anna Knight.  Anna said she woke up to find “this good looking guy” sitting at their kitchen table, offered to cook him breakfast and has been cooking for him ever since.  Eleven months later they were married in the Idaho Falls Temple and would have celebrated their 53rd anniversary August 20th.

When at home you could usually find dad with his nose in a good western or sci-fi novel or listening to classical music in his den.  But most of all he loved the outdoors and spent as much time as he could with his family camping, fishing, hunting or just being together.   We’ll always cherish these memories with dad except for maybe the elk and deer hanging in the garage with their tongues sticking out or the time we were camping and his snoring scared us because we thought it was a bear.

Dad was a true gentleman in every way.  He abhorred swear words but we still knew he was upset if he said “Turkey” or worst of all “Turkey Outfit.”

Family was everything to him and he leaves behind his wife, Anna Lenora Knight Wheeler and children Kimberly Schwarze (Ed), Mark Wheeler, Allyson Haynie (Derek), Janae Cull (Ted), Caroline Judd (Kevin), Mike Wheeler (Tiffany) as well as 17 grandchildren.  We’re especially grateful that in the last 3 weeks of his life all of his children were able to spend time with him and he was even able to attend the wedding of his oldest grandson (Deson) at the Payson LDS Temple.

Finally, surrounded by his wife, all four daughters and his youngest son, he slipped peacefully into eternity Thursday morning August 4th.

Funeral services will be Saturday, August 13th at 11:00 am at the Santaquin Downtown LDS Church, 90 South 200 East.  Friends may call at the Brown Family Mortuary, 66 South 300 East, Santaquin, Friday 6 to 8 pm and Saturday at the church from 9:45 to 10:45 am prior to services.  Interment, Santaquin City Cemetery.  Share condolences at www.brownfamilymortuary.com.

To order memorial trees or send flowers to the family in memory of Delwyn Wheeler, Jr., please visit our flower store.