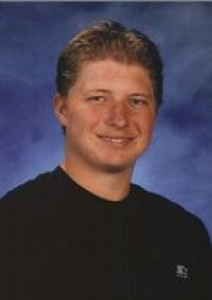 Derek Lee Terry, 19, passed away April 29, 2007 the result of a drowning accident. He is survived by his parents, Dale and Joettia Terry and his brother, Bryan of Eureka, Utah and his grandfather, Ted Terry of Vernon, Utah. He is preceded in death by his grandmothers, Jeanette Terry of Vernon, and Claudia Adams of Charleston, SC. He left behind many aunts, uncles, cousins, and friends. Derek was born June 15, 1987. He was known as Bubba. Derek spent much of his time riding 4-wheelers, fishing, camping, and hunting. He loved to spend time in the mountains with family and friends. He also loved anything that had a remote control. Derek enjoyed music and going to movies. One of his favorite things was playing in the water. Derek was a hard worker. He was always smiling and got along with everyone. He was a giving person and even in his death donated his organs to help others. Derek is loved by many and will be greatly missed. Family and friends are invited to remember and celebrate Derek's life on Thursday, May 3rd between 2:00 and 4:00 p.m. in the Eureka LDS Ward Cultural Hall. Dress is casual. In lieu of flowers, donations would be appreciated.

To order memorial trees or send flowers to the family in memory of Derek Terry, please visit our flower store.