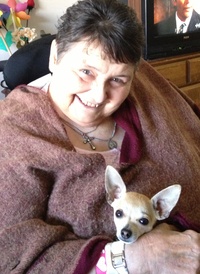 Dianne Marie Bigler Elliott, our loving mother, grandmother, great grandmother and friend, passed away peacefully in her sleep August 22, 2013 surrounded by her children and grandchildren.

On September 11, 1973 Dianne married Rex Elliott and they had a son. Dianne and her family lived in Eureka where she was involved with many community service programs.  One of the things Dianne loved being was an EMT where she help her fellow community members for 27 years.  Dianne was a practicing EMT until the day she had her stroke, April 9, 2011.  Her family members were very proud of all of her accomplishments during her years as an EMT. Dianne participated in and was President of the Lady Elks in Eureka.  Something Dianne loved and held close to her heart was being a School Crossing Guard.  It was something she looked forward to everyday.

Dianne was preceded in death by the love of her life, Gary Bigler, and a grandson, Morgan D Bigler.  She is survived by her husband, Rex Elliott, of Eureka; daughters, Shanna (Roy) Bradbury, Lorie (Lynn) Loveridge; 3 sons, Kyle (Patricia) Bigler, Michael (Becky) Bigler and Lynn (Jodie) Elliott; 14 grandchildren and 7 great-grandchildren.

Dianne will be greatly missed by her family. Go dance with dad and fly with the angels.

Funeral services will be held Monday, August 26th at 11:00 am at the Brown Family Mortuary, 66 South 300 East, Santaquin, where friends may call one hour prior to services.  Interment, Provo City Cemetery.

To order memorial trees or send flowers to the family in memory of Dianne Elliott, please visit our flower store.