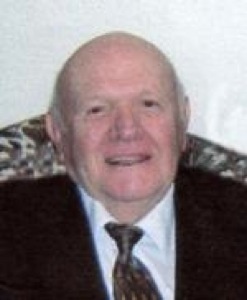 Dick Ross Kay, age 79 of Santaquin, passed away November 2, 2010 from leukemia. He was the second son of Roscoe and Maud Smith Kay. He was born in Santaquin March 25, 1931. He married Vida Giles August 12, 1949 and were later sealed in the Salt Lake Temple. He was the father of three children.

Just prior to their marriage, he joined the United States Navy serving for 20 years including in both the Korean and Vietnam Wars. He retired as a Chief Petty Officer specializing as a pharmacist.

After his retirement from the Navy, he attended the University of Utah earning his Pharmacy degree in 1973. He owned the Reams Pharmacy in Provo and the Santaquin Pharmacy in Santaquin. After selling his businesses, he worked at Allen's Pharmacy. He made many lifelong friends through his work.

His family was the center of his life. He enjoyed playing with his grandchildren, going camping, traveling, and spending time in Beaver Dam, Arizona during the winter.

He served actively in his community. He was a member of the Santaquin City planning committee, a member of the American Legion and the Disabled American Veterans. He was a member of the Church of Jesus Christ of Latter-day Saints where he served in many positions. He especially enjoyed his work as a Cub Master in Long Beach, California. He most recently worked in the name extraction program and extracted over thirty-eight thousand names.

He is survived by his spouse, Vida; his daughter, Rosemary Luque (Phillip-deceased); his sons, Roy Kay (Kathy), Thomas Kay (KayLynn); 12 grandchildren and 35 great grandchildren. He is also survived by his sister, Connie Pace (Russell-deceased) and a sister-in-law, Jerry Kay. He was preceded in death by his parents and a brother, LeRoy Kay.

The family would like to express their heartfelt thanks to the staff of the Provo Rehabilitation and Nursing Home for their loving and compassionate care. Also a special thanks to the Santaquin EMS and Santaquin Police Chief Dennis Howard who were always there when we needed them.

Funeral services will be held Monday, Nov. 8th at 11:00 am at the Santaquin 9th Ward, 545 North 200 East. A viewing will be held Sunday from 6 to 8 pm at the Holladay-Brown Funeral Home, 66 South 300 East, Santaquin and again at the church on Monday from 9:45 to 10:45 am prior to services. Interment, Santaquin City Cemetery with Military Honors by Santaquin American Legion, Post 84.

To order memorial trees or send flowers to the family in memory of Dick Kay, please visit our flower store.