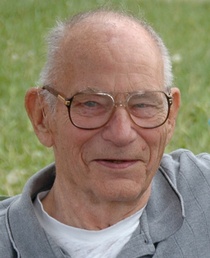 Donald Walter Van Moos went to be with the Lord Jan. 3, 2015 after a short illness.  He left this life surrounded by his loving family and his very dear friend Mary Ella Kronstadt.

Don was born Dec. 3, 1927 in Rochester, Pennsylvania to Eula Pearl Graham Van Moos and Walter Van Moos.  He was a high school graduate of the class of 1947 at Rochester High School.

Don married Diane Louise Morris of East Palestine, Ohio in 1960 in the Methodist Church.  In 1974 they joined the Church of Jesus Christ of Latter Day Saints and were sealed for eternity in the Washington DC Temple in 1981.  The family lived in East Palestine, Ohio for 40 years.  They moved to Eagle Mountain Utah in 2004 to be closer to their children. Diane preceded him in death in Oct. 2010.

Don worked for Jones & Laughlin Steel Mill in Aliquippa, PA for 30 years.  At the age of 48, the mill was reducing forces so Dad suddenly became retired.  This lasted for about a week, when he received a call from Howells & Baird Construction in Salem, Ohio who was looking for a Construction Engineer and had heard from a good source that Don was recently retired and would be a good fit for their company.  He loved working and many times in his old age, he would say that he just wished he was able to get up and go to work in the mornings.

Don served as a counselor in several Branch Presidencies, Elders Quorum President, High Council member but his favorite calling was working the Investigators and teaching the Gospel Principles Class.  Don and Diane served a two year genealogy mission at the Lisbon Courthouse in Ohio.  Their job was to help restore and digitize the court records.

Funeral services will be held at 11:00 am on Thursday, January 8th at The Church of Jesus Christ of Latter-day Saints on 1934 Cedar Trails Way Eagle Mountain, Utah.  The family will receive friends from 9:45 to 10:45 am prior to the services.  Interment will be at the Lehi Cemetery under the direction of Brown Family Mortuary, Santaquin.

To order memorial trees or send flowers to the family in memory of Donald Van Moos, please visit our flower store.