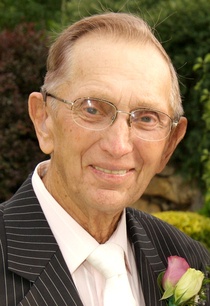 Shirl served in World War II in the Army Air Corps.  He installed and maintained radios and top secret radar in Army planes.  After the war, he attended BYU and then the Chicago College of Optometry where he graduated in 1949.  He met Anna Slahor, a nurse, in Chicago and they were married Nov. 30, 1949.  Their marriage was solemnized in the Salt Lake Temple in 1971.  They were blessed with three children, Deanna (Mike) Larsen, Robert (Cindy), and Lori (Curtis) Dunn, seven grandchildren, and four great grandchildren.

Shirl and Anna lived in Evanston, Wyoming, for 28 years where he had a successful optometry practice.  They moved to Genola in 1978 where Shirl semi-retired and operated his fruit orchards.  Anna passed away in 1990.  Shirl married Sharon Farnsworth August 2, 2004 and they enjoyed traveling around the world together.  Shirl was a lifelong member of the LDS Church.  Shirl leaves a legacy of service and love to his family and friends.

A viewing will be held Monday, Nov. 17th from 6-8 pm at the Brown Family Mortuary, 66 So. 300 East, Santaquin.  Funeral services will be Tuesday, Nov. 18th at 11:00 am at the Genola LDS Chapel at Main and Center Streets in Genola with a viewing from 9:45 to 10:45 am.  Interment Santaquin City Cemetery with military rites by Santaquin American Legion.

To order memorial trees or send flowers to the family in memory of Dr. Shirl Ekins, please visit our flower store.