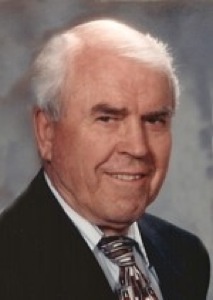 Earl L.Smith, 88, passed away peacefully at his home in Eureka,Utah on October 30, 2008 with his family by his side. He was born February 18, 1920 in Snowflake, Arizona to Jesse M and Louie Elizabeth VanWagoner Smith. He married Jane Brown October 25, 1950 in the Salt Lake LDS Temple . She passed away June 23, 2008. Earl graduated from Snowflake Union High School and attended BYU where he was voted friendliest man on campus. He was a Veteran of WWII, serving in the US Army. He was an active member of the LDS church, serving in the Central Pacific Mission in the Hawaiian Islands , and other callings throughout his life. He taught elementary school in the Alpine School District for 30 years. He returned to BYU and received his Masters Degree in 1981. His life revolved around his family and BYU sports. He was a scorekeeper for BYU women's athletics for 25+ years. Earl is survived by a daughter, Suzanne (Hortt) Carter and a son Michael, all of Eureka; grandchildren, AJ (Aimee), Emily, Kelcie, and Caitlin Carter of Eureka, Cody and Carlee Smith of Florida; great grandchildren, Clayton and Kailee Carter; siblings, Lilia Seegmiller, Leland Smith, JC (Buck) Smith, Ruth Hatch, Ronald Smith all of Snowflake, Arizona, Anne Klarer of New York. He was preceded in death by his wife, a daughter Marie, brothers Van, Roy, and Donald Smith, and a sister Peggy Hatch. Funeral Services will be Monday, November 3rd at 3:00 pm in the Goshen LDS chapel. Friends may call at the Holladay-Brown Funeral Home 66 South 300 East, Santaquin, Sunday 6 to 8 pm and Monday at the church one hour prior to services. Burial, Goshen Cemetery with military rites by Goshen American Legion. Our family would like to thank Heidi Lafferty, Liz and Ashley and A+ Home Care and Hospice for their kind and loving care.

To order memorial trees or send flowers to the family in memory of Earl Smith, please visit our flower store.