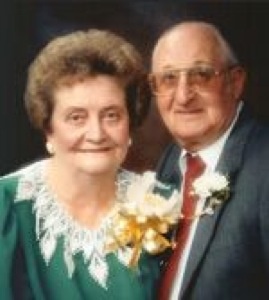 Our sweet mother, Edith Hill Tischner, 87, passed away peacefully April 25, 2007. She was born September 8, 1919 in Payson, Utah to Jasper F. and Alice Finlayson Hill, the twelfth of thirteen children. She was raised and educated in Payson. On November 22, 1939 she married her eternal sweetheart, Kathle L. Tischner, in the Salt Lake LDS Temple. He died May 25, 1996. They lived in Santaquin where they raised their five children and later moved to Payson where they lived for many years. Mom spent her life supporting, helping and loving her husband, children, grandchildren, parents, nieces and nephews, brothers and sisters, and neighbors. Hers was a life of service and she will be missed by all whose lives she touched. Her home was always open to all. She was a great cook and fed whoever showed up or took a meal to anyone she thought in need. She faithfully served her whole life as a valiant member of the LDS Church in many ward and stake callings and she was also active in civic clubs and auxiliaries. She is survived by 3 sons and 2 daughters; Kay L. (Louise), Alan G. (Erma Lee), Janice Gasser, Ann (Ben) Wilson, and David L. (Rilla); as well as 26 grandchildren, 57 great grandchildren; and a brother, Earl Hill, of Bountiful. She was preceded in death by her husband, grandson, Bradley Tischner, 2 great grandchildren, Blake Ludlow and Faith Wilkey, and a son-in-law, LaVell Gasser. The family is so appreciative of the tender loving care our mother was given the last three years by the entire staff at Latter-Day Assisted Living in Santaquin. We will always be grateful for their compassion and love. Likewise, the help and sweet concern given by her caregivers from Hearts for Hospice was immeasurable. Friends and family are invited to join us Sunday evening from 6 to 8 p.m. at the Holladay-Brown Funeral Home, 66 South 300 East, Santaquin and Monday from 9:45 to 10:45 a.m. at the Old Santaquin Stake Center, 90 South 200 East. Funeral services will be held Monday at the church at 11:00 a.m. Burial, Payson City Cemetery.

To order memorial trees or send flowers to the family in memory of Edith Tischner, please visit our flower store.