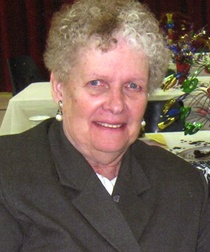 Verna Eileen Davis, 78, passed away June 26, 2016 in Provo, Utah of complications from a stroke.  Eileen was born September 13, 1937 in Singapore to Gerald and Leona Minchin.  They left Singapore as World War II was starting and moved to Australia and from there moved to Canada and finally back to the United States when Eileen was 8.

She married Roger Eckert in 1957 and together they had four sons, Glenn, Bryan, Kevin and Tim.  They lived in many places throughout the US and Germany, finally settling in California.  They later divorced.

In 1979 she married Lyman Davis and they lived in California until 1984 when Lyman retired and they moved to Vineyard, Utah.  Eileen had worked for Bank of America in California and when they moved to Utah she went to work for Provo Craft as a designer and painter.  She was an amazing artist.  After Eileen retired they moved to Eureka, Utah where she was living at the time of her passing.

To order memorial trees or send flowers to the family in memory of Eileen Davis, please visit our flower store.