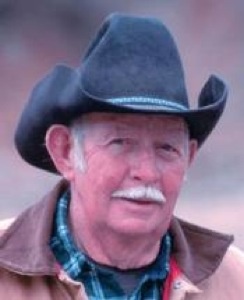 On June 22, 2013 another cowboy made his final ride. Elfawn Finch Wall passed away quietly at his home surrounded by his family. He was born March 19, 1927 to Edris Finch and Lionel Wall in Santaquin, Utah. On October 7, 1950 he married Ruth VanAusdal in Pioche, Nevada and together they raised three children instilling in them the value of hard work, respect for others, and a love of animals especially horses. Fawn's greatest joy and legacy were his 10 grandchildren and 17 great-grandchildren, whom he loved spending time with.

Fawn attended school in Santaquin from elementary through the ninth grade when he dropped out to help support his family. At the age of eighteen he was drafted into the United States Army and as a PFC served in the military police stationed at Fort Bragg, North Carolina. He served his country in South America.

Fawn was a member of the Church of Jesus Christ of Latter Day Saints and was religious in his own way. He was member of the Operating Engineers Local 3 for fifty years. He worked on Glen Canyon Dam, Page, Arizona, Feather River Dam, Orville, California, Central Utah Water Project, Current Creek, Utah and Intermountain Power Project, Delta, Utah. As an attribute to his work ethic while working on the Glen Canyon Dam, Fawn worked swing shift, seven days a week for seven years without a day off.

After retiring, Fawn bought a van and peddled fruit and BS throughout central Utah. He had the gift to gab and never met a stranger. Throughout his peddling he gained the respect and friendship of many. He often traded fruit for what he felt was a treasure and or gave produce to those in need.

Fawn was born with a love for horses and the western way of life. As young man he enjoyed "mustanging", rodeoing, breaking colts, and riding clubs. He shared his horse knowledge serving various positions in several riding clubs. Fawn enjoyed teaching his children horsemanship as well as sportsmanship and enjoyed watching them participate in many horse activities. Fawn also enjoyed big game hunting with family and friends. He especially enjoyed pheasant hunting, enjoying time with his son and his dog Skip.

Services will be held Wednesday, June 26th at 1:00 pm graveside at the Santaquin City Cemetery. Family will greet friends at the Brown Family Mortuary, 66 South 300 East, Santaquin, from 11:00 to 12:45 pm prior to services.

To order memorial trees or send flowers to the family in memory of Elfawn Wall, please visit our flower store.