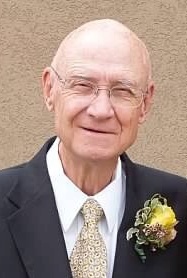 Elliott Jay Fowkes of Santaquin, UT, and formerly of Coalinga, CA, passed away June 25, 2017 at age 82 after a valiant fight with cancer.

Jay was born on Valentine’s Day, 1935 in Salt Lake City, UT to Charles Mortimer Fowkes, Jr. and Signe Olivia Krantz Fowkes.  The oldest of 3 boys, Jay grew up speaking sign language, as both his parents were deaf.  Jay and his brothers had a rich and fulfilling childhood on a ranch outside Evanston, WY.  They raised sheep, cows, and had horses.  At a young age, Jay would ride a horse to the one-room country school house.

Jay graduated from Evanston High School in 1953 at the top of his class.  He was accepted to Brigham Young University where he graduated with a Bachelors degree in Geology and a minor in Physics & Chemistry.  In 1957, Jay was drafted into the Army where he served as a petroleum supply specialist for 2 years.  After fulfilling his military commitment, he served as a missionary for the Church of Jesus Christ of Latter-day Saints in the Brazil South Mission.  After his mission, he returned to BYU and earned a Masters degree in Geology-Mineralogy in 1964.

While at BYU, Jay met Ione Beutler from Dayton, ID at a roller skating activity, where the wheels of his roller skates mysteriously fell off, sending him crashing into Ione, where they subsequently, “fell for each other”.  They were married in the Logan Utah Temple on June 4, 1964.  Shortly after, they moved to Coalinga, CA, after Jay accepted a teaching position at West Hills Community College.  With his own hands, Jay built a beautiful home on the outskirts of Coalinga and raised a large family which eventually grew to eight children.  Jay was a kind and patient husband and father who taught his children to value hard work, and to be true to their principles.

For 38 years, Jay enjoyed teaching Geology and Physical Science courses at West Hills Community College.  He would take his students on yearly Geologic field trips to the Grand Canyon and to Death Valley.  He could easily out-hike his younger students up the steep trails of the Grand Canyon.  Some called him “the old mountain goat”.   Jay was an excellent teacher and was beloved by his students.

Jay never stopped learning and studying.  In July 1982, he obtained a Doctorate degree in Geologic Education from the University of Santa Barbara, CA.   Jay authored and published 3 major Geologic guidebooks.  After the great Coalinga CA earthquake of 1983, which resulted in many people losing their homes, Jay became the local expert on earthquakes.  He was frequently interviewed by television news reporters.  Jay and Ione traveled around the State of California lecturing on earthquakes and how to prepare for them.

A member of the Church of Jesus Christ of Latter-day Saints, Jay served as the Coalinga Ward Bishop for almost 6 years, from 1979-1984.  Shortly thereafter, he served in the Hanford CA Stake Presidency for 9 more years.  In 2009 and 2010, Jay and Ione served as Senior Couple Missionaries at the Brazil Recife Temple.

In lieu of flowers, a donation to one of the following charities would be greatly appreciated:  “The Huntsman Utah Cancer Institute”, or the “LDS Humanitarian Aid Fund”.

To order memorial trees or send flowers to the family in memory of Elliott Jay Fowkes, please visit our flower store.