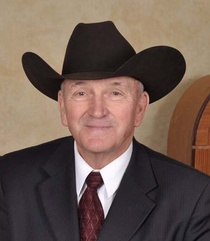 Forest Graham McKinnon, 79 passed away in Modesto, California June 27, 2016. He was born in Randolph, Utah to Ila Graham and William Muir McKinnon.  Forest married the love of his life, Myrna Williams, August 18, 1955.  They were married for over 60 years and had six children.

Forest was a hard worker.  He worked hard and as many that knew him know, he also played hard. Forest was competitive in almost everything he did and whether it was something easy or hard he had fun doing it. Forest retired after 30 years as a railroad engineer in 2000. He lived in Atascadero, California for 42 years then moved to Kuna, Idaho and then Modesto, California.

Forest’s biggest love was his wife and a close second was his love of horses.  He loved riding, rodeos, team roping and teaching it to anyone that wanted to learn.  Many people would come over to his roping arena and enjoy roping with him.  He was a very good horseman.  He trained many horses and spent countless hours training other people’s horses as well.

Forest was well loved by anyone that knew him. He was generous and would help anyone that needed help.  Forest loved people and had many friends.  He loved country music and he loved to dance with his wife Myrna.  He had a great sense of humor and loved to laugh and tell a good joke.  He had a big heart.

Forest was a member of the LDS church and had many callings. One of his favorite callings was as a temple worker and going to the temple.  This calling gave him a higher purpose and he cherished it.  He was later called to be Bishop of the Kuna 8th ward.  He was known as the cowboy bishop.  This calling allowed him to share his love for others on a grander scale.  Forest will be missed by those that had the pleasure of knowing him.

Funeral services will be held on Saturday, July 2nd at 10:00 am at the Benjamin, Utah LDS Church, 3238 West 7300 South, Spanish Fork, Utah where friends may call from 9:00 to 9:45 am prior to services.  Interment will be in the Benjamin cemetery

To order memorial trees or send flowers to the family in memory of Forest McKinnon, please visit our flower store.