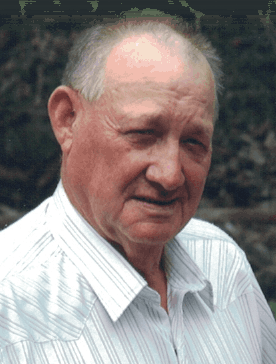 He was raised with 8 siblings Max, Glen, Anna, Sarah Marie, Bert, Rex and Betty in Spanish Fork, Utah. Fred had to overcome many hardships. He lost his dad at a young age. He learned how to work hard on the farm and do many chores to survive. He enlisted in the Army at the age of 17 and served in California, Texas and Hawaii.

After returning home from the Army he met Ida K. at a party. She tried to stay away from him but his charm finally won her over. They were married June 27, 1958 in her parent's home. together they raised four children, Raymond, Sheri, Bert and Joe making their home in Salem, Utah.

Fred worked for Pacific States Cast Iron for 30 years. He also spent many hours farming in Springlake and Chester. His wife was always at his side. After retirement Fred and Ida decided to move to Chester where they raised many cows and other farm animals. The freezer was always full of plenty of meat. For fun they followed the rodeo circuit for a while.

Together they enjoyed 35 years of traveling to Logandale and Yuma Arizona during the winter months. Daily routines were morning bike rides to Mexico for coffee, swap meets, picking grapefruits and making many new friends who became family. Logandale offered many hours of watching quail and sunsets on the porch.

About six years ago, they decided moved to Santaquin so they could be closer with children, grandchildren and great-grandchildren. Watching them grow up brought them much joy.

If you knew Fred you knew his sarcastic humor and quick wit to tease people. In his last few years he watched old westerns, taught the great grandkids how to fish, shell pine nuts and make root beer floats. Fred leaves behind a legacy of hard working children and grandchildren. His great grandchildren will hear colorful stories about him for decades to come.

Fred is survived by his 3 children, Raymond Butler, Sheri (Roger) Zeeman, Bert (Mykla) Butler, 10 grandchildren and 8 great grandchildren.  He is preceded in death by his wife, Ida K, his son Joe, and grandson Deven. He will be greatly missed by all.

To order memorial trees or send flowers to the family in memory of Fred Butler, please visit our flower store.