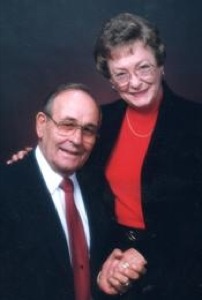 Ted was raised in Dividend and Eureka, Utah. He owned and operated his own trucking business in Eureka. He worked for Kennecott as a personnel manager at the Burgin mine near Eureka. He later moved to Denver and worked for Phelps Dodge also as a personnel manager. He later relocated to Tucson, AZ and owned Tucson Business Brokers and operated it with his wife Jeannine. Later they moved to Payson to be closer to family.

Ted was a member of the Methodist church in Eureka, the Tintic Elks Lodge #711, lifetime member, and a member of the Tintic Masonic Lodge #9. He was also a member of the Eureka Senior Citizens. He loved life and being with family and friends. He enjoyed the outdoors, especially the time he spent at Fish Lake, fishing and spending time with his Fish Lake friends.

He is survived by his children, Janice (Gary) Boswell, Ted (Bobbie) Johnson, all of Eureka, Paul (Laura) Johnson, Tucson, Arizona; 7 grandchildren, 10 great grandchildren and 2 great-great grandchildren; a sister, Jill Snell, of Santaquin. He was preceded in death by his wife, Jeannine, a daughter, Nancy Riley, two sons, Lloyd and Roger, a grandson, Gary Lynn Boswell, and 3 brothers.

Funeral services will be Thursday, Sept. 8th at 11:00 am at the Tintic Elk's Lodge in Eureka, Utah. The family will greet friends at the Holladay-Brown Funeral Home, 66 South 300 East, Santaquin, Wednesday from 6 to 8 pm and Thursday at the Elk's Lodge one hour prior to services. Interment, Spanish Fork Cemetery.

The family would like to thank Vista Care for all of the loving care they have provided and thank you nurse Nancy.
To order memorial trees or send flowers to the family in memory of Frederick Johnson, please visit our flower store.