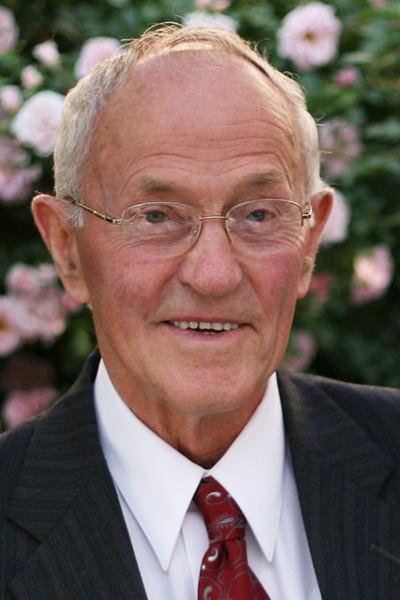 Gale J. Plato, 91, realized his desire to again be in the arms of his beloved wife Tuesday morning, March 5, 2019 at Seasons of Santaquin in Santaquin, Utah.

He was born as John Gale Plato to John Sheffield and Nellie Eulalia “Eula” Ferrill Plato on May 20, 1927 in Bonners Ferry, Idaho. Gale graduated from Bonners Ferry High School in 1945 followed by twenty months of service in the Army in South Korea. He married Ramona Mae Holmes in Coeur d’Alene, Idaho on June 30, 1948 and she endured his relentless teasing for the next 68 years until her death in December 2016. Despite her lack of amusement towards his playful provocation, their marriage was later solemnized in the Cardston Alberta Temple.

Gale worked in the logging industry as a sawyer. Except for those -40° days, he loved working in the woods, falling trees for nearly forty years.

Along with his wife and children, Gale became a member of the Church of Jesus Christ of Latter-day Saints in 1961. He served in many callings in the church over the years but especially took pleasure in sharing his love for the Gospel of Jesus Christ through missionary work.

Although Gale and Ramona planted a large garden every year, Gale’s pet project was his orchard where along with a variety of fruit trees, he grew many types of berries and his cherished grapes. He also had a great love for reading, history, and homemade pie. No one was a stranger, at least, not for long.

After raising their family in Bonners Ferry, Gale and Ramona moved to Santaquin, Utah to be closer to three of their four children. In Utah, they relished time with their children and grandchildren, making new friends, and exploring the state. Many might remember Gale from his employment at Macey’s in Spanish Fork and he also drove delivery truck for Olson’s Greenhouse.

In 2016, Gale and Ramona moved into Seasons of Santaquin. Gale greatly enjoyed the company of his friends there and loved to share stories, bask in the sun at the front of the building, and help wherever he saw a need. His abiding sense of humor lightened the burdens of many.

The family will be forever grateful to Richard Porter and his amazing staff at Seasons of Santaquin for their loving care and friendship. They are also grateful to First Choice Hospice for helping to care for Gale during his last few months.

Gale is survived by his children, Wanda Jones (Gene) of Salem, Utah, John (Cindy)of Kona-Kailua, Hawaii, Ferrill Bancroft (Brooke) of Payson, Utah, and Jared (Kate) of Pleasant Grove, Utah, 21 grandchildren, 15 great-grandchildren, and 7 great-great grandchildren. He was preceded in death by his wife, his parents, his siblings and a grandson.

Funeral Services will be 11:00 a.m. on Saturday, March 9th at the church at 90 South 200 East, Santaquin. A viewing will be held  9:30 to 10:30 a.m. prior to funeral services. Interment with military honors will follow at the Santaquin City Cemetery. Share condolences and memories of Gale at www.brownfamilymortuary.com.

To order memorial trees or send flowers to the family in memory of Gale Plato, please visit our flower store.