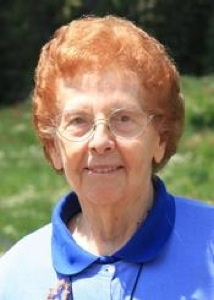 Our beloved mother, grandmother, aunt, sister-in-law and friend, Grace Evelyn Green Bernini, passed away peacefully December 7, 2012 with her children at her bedside and Father Paul McCarthy in attendance. Grace was born November 25, 1921 in Tawatinaw, Alberta, Canada to Leo and Maude Eveline Wiley Green. At age six, following the death of her mother, Grace moved to Silver City, Utah with her dad, brother Bob, and her sister Leona. While in Silver City, her dad married Edythe Ivy Green. Grace attended school in Eureka and graduated from Tintic High. She met Joseph Bernini at one of the softball games she enjoyed playing so much. She and Joe were married on April 12, 1943. They made their home in Eureka for 66 years until Joe passed away in May, 2009.

Grace worked hard providing a home for her husband and two sons but also was busy as a volunteer for her church, St. Patrick's Catholic Church of Eureka where she was named Women of the Year. She was a lifetime member of the Lady Elks, and as Secretary Treasurer for the Juab County Democratic Party. In 1979, Grace started work at the Eureka Reporter. She worked as reporter, photographer, and later as the Editor of the paper until she retired in 1999. After many years of volunteering in various organizations in Eureka, Grace and Joe were honored as Senior Citizens of the Year in 2002.

Grace also enjoyed traveling to see family in New York. She loved bowling and had a great talent for the game. She and her team, The Alley Cats, won numerous trophies in competition.

Grace is survived by her sons, David (Linda) and James (Christine); her grandchildren Gregory and Angella and great grandchildren; brothers/sister-in-law John, Jim, Nick, Dominick and Theodora; and many nieces and nephews. She will be sorely missed. Grace was preceded in death by her parents Leo, Maude, and Edythe Ivy Green; her husband of 66 years, Joe; her sister Leona (Darrell) and brother Bob.

To order memorial trees or send flowers to the family in memory of Grace Bernini, please visit our flower store.