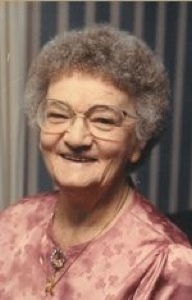 Harriet Leone Nelson Thatcher, 91, passed away August 29, 2007 in Peoria, Arizona. She was born June 27, 1916 in Sandy, Utah to Ephraim Raymond and Harriet Abiah Blackham Nelson. She attended school in Genola and Goshen and then chose to remain home to attend to her ailing mother which was typical of her life of service. She loved family, grandchildren and flowers. She married Howard Leo Thatcher Sept. 18, 1933 in the Salt Lake Temple. She was a member of the Church of Jesus Christ of Latter-day Saints and was active in different capacities but Primary was always her first love. With her husband, she served a building construction mission in the South Pacific (Tongan Islands). She was preceded in death by her two youngest daughters, Harriet Myrl and Lynda Rae, her husband, and her only son, Larry. She is survived by her daughter, Carolyn (Paul) Schofield of Oregon, Larry's wife, Rosemary, who was with her at her death, and two brothers, Max E (Melba) Nelson of Genola and Eugene (Benoni) Nelson of Alaska, 17 grandchildren, 64 great grandchildren and 12 great great grandchildren. Funeral services will be Tuesday, Sept. 4th at 1:00 p.m. in the Payson West Mountain Chapel, 5237 West 10400 South. Friends and family may call Monday 6 to 8 p.m. at the Holladay-Brown Funeral Home, 66 South 300 East, Santaquin, and also Tuesday one hour prior to services at the church. Interment, Payson City Cemetery.

To order memorial trees or send flowers to the family in memory of Harriet Thatcher, please visit our flower store.