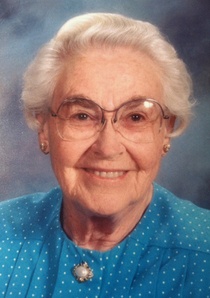 Our beloved and sweet Mother, Grandmother, Great-Grandmother and Great-Great-Grandmother was called home to her Heavenly Father and her awaiting husband on May 27, 2014 surrounded by loved ones.  Helen was born on September 12, 1924 in her grandmother’s home in Parowan, Utah to Ida Walker Jones and John Alvin Davenport.  Helen was a strong resilient woman full of compassion and empathy for others. She loved music and was a songbird who brightened the lives of her family, friends and everyone whose lives she touched.

During the great depression, Helen’s family moved from Parowan to many small southern Utah towns before they moved to Payson.  While in Payson Helen worked at By’s Café where she met handsome Cleon J Chatwin.  On their first date, on June 3, 1943, Cleon took her fishing on Utah Lake; the only thing Cleon caught that day was Helen’s heart.  Seven weeks later they were secretly married on July 21, 1943 by a close friend on the banks of Cottonwood Creek in Salt Lake City, Utah.  A week later on July 28, 1943, a civil ceremony was performed in her parent’s backyard.  Their marriage was later sealed for Time and All Eternity by proxy in the St. George Temple on June 15, 1993.

After the untimely passing of Cleon in December 1972, Helen focused on their children, raising four out of eight of them on her own.  In the early 80’s Helen returned to Genola and lived the rest of her years there.  She enjoyed many trips with family members to Hawaii, South Dakota, San Francisco, Oregon, Washington, Mexico, Europe and Israel.  Helen enjoyed painting and also had a deep love for music that was instilled in her from her grandfather and she spent many years in choirs and singing groups and also performed solos.  She had the voice of an angel.  She often would break into song for no reason whatsoever.

Children were a huge part of Helen’s life, known to many as simply Grandma Chatwin.  She adored children and loved working with them.  She volunteered over 34 years of service in elementary schools; the last 24 years she was Grandma Chatwin to literally hundreds of children in the Goshen School District’s Foster Grandparents Program, working as a Teacher’s Aide in kindergarten. The family wishes to extend a special thank you to Patsy Barlow and Teona Shepherd for watching over Grandma at school.

Helen loved the gospel and her Savior.  She was active in the Church of Jesus Christ of Latter-Day Saints and held many positions in the church; her favorite being the Compassionate Service Leader as she enjoyed serving others.  She was part of the choir and sang often.  Helen loved attending the Temple and treasured the day she was sealed to her darling Cleon.

Grandma Chatwin is survived by her eight children, Lorin (Mavis), Harvey (Bonnie), Merrill (Kathy), Linda, Charles (Kathy), John (Rozina), Helen (Lorin) Holm, and Laura.  She is also survived by her 52 grandchildren, 74 great-grandchildren and 2 great-great grandchildren.  She is preceded in death by her parents; her husband, Cleon; her brothers Clynn and Harvey Davenport; and her grandson, Gary Lynn Chatwin.

Funeral Services will be held on Tuesday, June 3, 2014 at 12 pm at the Church of Jesus Christ of Latter-Day Saints (Genola Church), Center & Main Street, Genola Utah.  A viewing will be held at the same location on Monday, June 2, 2014 from 6-8 pm and one hour prior to service.  Helen will be laid to rest in the Santaquin City Cemetery next to her love, Cleon.  Grandma will be deeply missed by all those who loved her and those who have been touched by her sweetness. The family wishes to extend a special thank you to Angie and Marie at Hearts for Hospice for their gentle and compassionate care of Grandma.  Flowers may be sent to Brown Family Mortuary, 66 South 300 East, Santaquin, Utah 84655.

To order memorial trees or send flowers to the family in memory of Helen Chatwin, please visit our flower store.