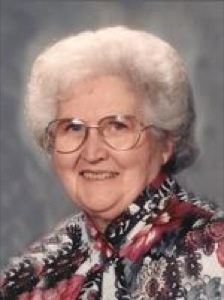 On a beautiful summer morning, our loving wife, mother, grandma, grandma great, sister, aunt and friend, Jane Brown Smith, passed away June 23, 2008 at her home in Eureka. She was born March 27, 1925 in Lovell, Wyoming the 7th of 9 children to Eben Ray and Marie Easton Brown. She lived in Lovell and Sunlight until 1939 when her family moved to Manilla, Utah. She then attended schools in Pleasant Grove, graduating from Pleasant Grove High School in 1943. She continued on with her schooling attending the University of Utah graduating with her RN in 1946. In 1948 at the age of 24, she was called and served a mission to the Central Pacific Mission in the Hawaiian Islands. Upon her return she met her eternal sweetheart, Earl L. Smith, on a blind date. They were married October 25, 1950 in the Salt Lake Temple. They lived in Snowflake, Arizona until moving to Orem in 1964. Jane went to work at Utah Valley Hospital in 1965 and retired in 1985 after 20 years of service. She is survived by her husband, Earl, daughter, Suzanne (Hortt) Carter, and son Michael, all of Eureka; her grandchildren, AJ (Aimee), Emily, Kelcie & Caitlin Carter of Eureka, Cody & Carlee Smith of Florida; great grandchildren, Clayton & Kailee Carter; a sister, Ruth (Cloyd) Christiansen, of Pleasant Grove, and many nieces and nephews. She was preceded in death by a daughter, Marie, her parents and 7 siblings. Our family would like to thank Heidi Lafferty and A+ Home Care and Hospice for all of their kind and loving care. Gravedside services will be Thursday, June 26th at 11:00 a.m. at the Goshen Town Cemetery, 500 South Center, under the direction of Holladay-Brown Funeral Home, Santaquin.

To order memorial trees or send flowers to the family in memory of Jane Smith, please visit our flower store.