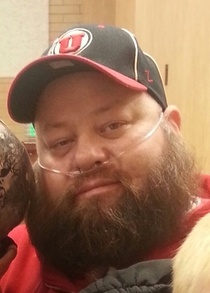 Our beloved husband, father, uncle, son, brother and friend, Jarrod Wade Reese “JR”, returned to his Heavenly Father  October 9, 2014 while surrounded by his loved ones.

JR was born December 4, 1968 to Lannie and Mary Reese.  He grew up in Spanish Fork and graduated from Spanish Fork High School.  JR met the love of his life, Laurie Cook, in 1994. ,They were married March 8, 1997 in Goshen Utah. In 2000 JR’s pride and joy, Elizabeth, entered his world and life has never been the same.

JR met many of his life-long friends while working at Mountain Country Foods. He started with the company when he was 18 years old. In 2006 his health forced him to retire. JR never met a stranger. Wherever he went he always knew a friend here and a friend there. JR will always be remembered for his caring and accepting nature. You always had a friend in JR.

JR loved to spend his time outdoors, hunting, fishing, and camping. He loved to travel with his family. He enjoyed going to the Mountain Man Rendezvous and to car derbys.

He is survived by his wife, Laurie, and daughter, Elizabeth, both of Santaquin; “Sweet Heart” Shelby Thomas; “His Boys” Colby and Zayden Cook of Goshen; his father, Lannie, of Spanish Fork; mother-in-law, Glenda Cook, of Goshen; a sister, Barbara; and brothers, Bob and Brandon.  JR is also survived by Laurie’s siblings, Douglas and son Austin, Lisa, Jennifer and Kristy, along with numerous nieces, nephews and friends.  He was preceded in death by his mother, Mary Reese, and his father-in-law, Gordon Cook.

The family would like to thank IHC Home Care, Dr. Michael Pearce and UVRMC 2nd floor staff for all the love and care shown to JR over the last few years.

Funeral services will be held Monday, October 13th at 11:00 am at the Santaquin North Stake Center, 545 North 200 East.  Friends may call at the Brown Family Mortuary, 66 South 300 East, Santaquin, Sunday 6 to 8 pm and Monday at the church from 9:30 to 10:45 prior to services.  Interment will be in the Goshen Cemetery.
To order memorial trees or send flowers to the family in memory of Jarrod Reese, please visit our flower store.