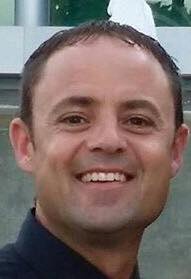 Jason Andrew Dickie, age 43, passed away at his home on March 29, 2015 after fighting a long and very difficult battle with anxiety and depression.  He is finally at rest in the arms of our loving Heavenly Father.

Jason was born January 2, 1972 in Salt Lake City to Edward Owen Dickie, Jr. and Marilyn Ann Tolley.  He is survived by his best friend and wife, Dayna Dawn Warenski Dickie, their three children, Matthew, Jessica, and Conner; his parents, Edward and Marilyn Dickie; his siblings and their spouses, Edward (Wendy) Dickie, Brent (Amy) Dickie, Candace (Brett) Maylett, and Justin (Tasha) Dickie; his mother and father-in-law, Robert and Dawn Warenski, and many special nieces and nephews.

Jason loved the outdoors.  He was an avid fly fisherman.  He liked to go bike riding with his family, enjoyed working in and beautifying his yard, and took daily walks with his best friend.

Being around children was one of Jason’s greatest passions.  He taught elementary school for nine years where he was loved and admired by all those he came in contact with.  He was everyone’s “favorite teacher!”

The world was a better place because Jason was in it.  He knew how to make everyone feel like the most important person in the world.  Jason was the most caring, compassionate, loving, hard working, and gentle man we knew. He would do anything to make others happy.  He had an incredible light in his eyes and a genuine smile that let his beautiful spirit shine through.  We love Jason, and will miss him with all of our hearts.  We are comforted by the knowledge that families are forever, and that we will be with him again!

To order memorial trees or send flowers to the family in memory of Jason Dickie, please visit our flower store.