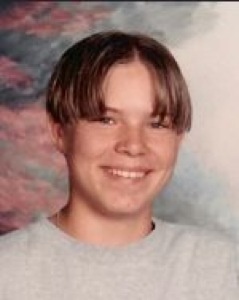 Jason Edward Fox, age 22, passed away Saturday January 27, 2007 in Spanish Fork. He was born July 30, 1984 in Payson, Utah to Charles Edward and Leslie Kaye Leifson Fox. He was the youngest of four children. Jason grew up and attended school in Nephi and Spanish Fork. He was most proud of his high school diploma. Jason was a beloved son, grandson, brother, nephew and uncle. He will be greatly missed. He is survived by a sister, Patrisha (Jeff Jarvis) Burnell, two brothers, Byron (Shanon) Garrett, and Darren (Viki Neil) Garrett, grandmother, Nelda Leifson, as well as several aunts, uncles, cousins, nieces and nephews. He was preceded in death by his mother and father, grandfather, George Leifson, and an uncle, Lloyd Leifson. A viewing for friends and family will be held Thursday, February 1st from 6:00 p.m. to 8:00 p.m. at the Holladay-Brown Funeral Home, 66 South 300 East, Santaquin. Private graveside services for immediate family and close friends will be held at the Santaquin City Cemetery Friday, February 2nd at 11:00 a.m. Family may call from 9:45 a.m. to 10:45 a.m. at the Holladay-Brown Funeral Home. In lieu of flowers, a fund in Jason's name has been set up. Contributions may be made at any Zions Bank.

To order memorial trees or send flowers to the family in memory of Jason Fox, please visit our flower store.