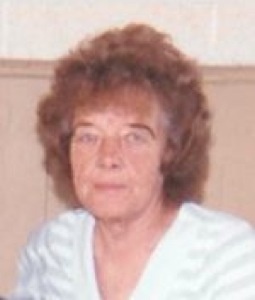 Marjorie Jean Cook passed away at her home in Goshen June 23, 2008. She was born March 16, 1930 to Henry Herbert and Sarah Amilia Peterson in Los Angeles, CA. She married Vivian Doyle Cook October 3, 1945 in Provo. She was preceded in death by her husband Doyle and three brothers, Michael Samuel, Clifton Israel and Steven Levi Peterson. She is survived by her sister, Laraine (Paul) Smith of Vallejo, CA, two brothers, Jeffery Peterson of Payne Creek, CA and Eric Peterson of Gerber, CA (who jokingly called her the "Queen of Goshen. Mother of all things". She is also survived by her five children, Harvey (Lynett) Cook of Nephi, Barbara "Bobby" Jean (Paul) Hyde of Kearns, Gaylen (Yaunna) Cook of Goshen, Terry (Tammy) Cook of Goshen, David (Kristie) Cook of Mapleton, numerous grandchildren, great grandchildren and 1 great great grandchild, and her best friend, Lola Jacobson of Goshen. Jean enjoyed making quilts and baby blankets, crocheting, camping and yard sales. Graveside services will be Friday, June 27th at 11:00 am at the Goshen Town Cemetery, 500 South Center under the direction of Holladay-Brown Funeral Home, Santaquin. Terry and Tammy would like to give special thanks to Deena McCloud and A+ Home Care and Hospice for all of their wonderful help.

To order memorial trees or send flowers to the family in memory of Jean Cook, please visit our flower store.